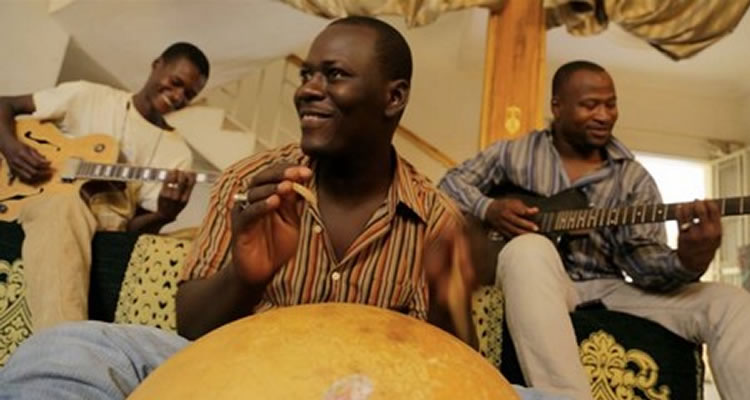 They Will Have To Kill Us First

THEY WILL HAVE TO KILL US FIRST (UK/IFI/89mins)
Directed by Johana Schwartz. Starring Khaira Arby, Songhoy Blues, Moussa Sidi, Fadimata ‘Disco’ Walet Oumar.
THE PLOT: Following the civil war of 2012, northern Mali musicians found themselves in the curious position wherein Islamist extremists had banned the playing of music. Forced into exile, singers Khaira Arby and Fadimata ‘Disco’ Walet Oumar try to fight the good fight, their cause helped by the fact that the latter’s husband, Hassan Ag Mehdi, is a member of the Tuareg liberation movement MNLA. The fighting escalates though, and some outside help is needed. The arrival of Damon Albarn’s Africa Express project – bringing western and African musicians together – helps highlight the musicians plight on an international stage…
THE VERDICT: Slickly made – almost a little too slickly, for a documentary – ‘They Will Have To Kill Us First’ captures recent unrest in Mali through the eyes of the musicians there fight an Islamic ban on music. Concentrating largely on the legendary singer Khaira Arby and newcomers Songhoy Blues (who end up playing Albert Hall and being signed to a UK label after some Damon Albarn help), Schwartz’s documentary is easy to watch, and touches on some important issues.
That it does so with a near-clinical cool shouldn’t take away from the politics behind the beats here. The ban is now lifted, but the troubles remain.
RATING: 3/5
Review by Paul Byrne