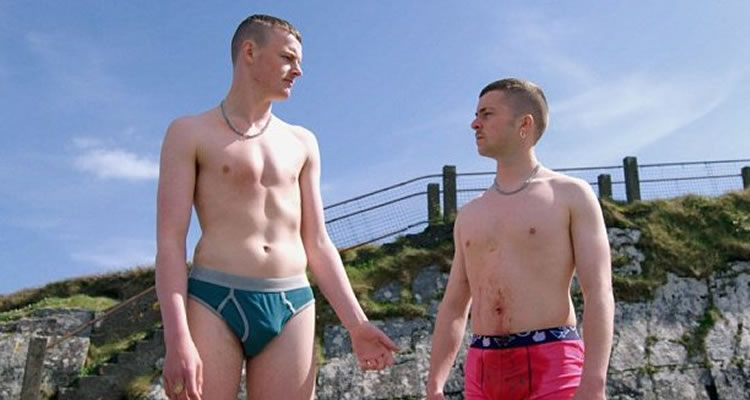 THE YOUNG OFFENDERS (Ireland/15A/84mins)
Directed by Peter Foott. Starring Alex Murphy, Chris Walley, Hilary Rose, PJ Gallagher, Dominic MacHale
THE PLOT: In 2007, 61 bales of cocaine were washed into the sea off the coast of Cork. 15 year olds Conor (Alex Murphy) and Jock (Chris Walley) dream of a better life, away from stealing bikes in Cork City and getting chased by local police, so when they hear that each bale of cocaine floating in the sea is work €7 million, they steal bikes and head off on the trip of their lives.
THE VERDICT: Inspired by real events, ‘The Young Offenders’ is an over the top dream of a movie, starring two young actors whose chemistry together in screen feels real and infectious, as well as a cast of characters that will be instantly recognisable to Irish audiences.
Alex Murphy and Chris Walley lead the cast as the wannabe young offenders of the title. The two characters – Conor and Jock – are not only best friends, but they egg each other on as they desperately try to make better lives for themselves through petty crimes. The two are opportunistic but charming, and their natural feeling relationship is lovely to watch on screen, even as they tease one another, jokingly fight and generally behave as though they don’t like each other; it’s the Irish way. These two are backed up by Hilary Rose as Conor’s mother Mairead, PJ Gallagher as a man hell bent on vengeance and Dominick MacHale as tenacious local Garda Healy.
Peter Foott’s screenplay takes its inspiration from true events, then pits two fictional characters against the truth. The fact that people flocked to Cork to try and fish bales of cocaine out of the sea is not necessarily true, but definitely could be, and this is where the screenplay not only gets its charm, but also its outlandishness. The pacing of the film is strong for the most part, although the final act of the film – after the road movie portion of the film is over – feels as though it runs out of energy. The laughs are there in the film, but are rather intermittently spaced, and a lot of them seem to come from scenes that feel improvised rather than deftly scripted.
As director, Foott makes the film a sundrenched caper – unusual for Irish film in more than one way – and it is a joy to spend time with these two foul mouthed wannabe criminals as they are chased all over County Cork by a tenacious cop determined to catch them for petty theft, without realising what they are actually on the road for. The film is well paced for the most part, but the over the top final act and some dodgy acting from comedian PJ Gallagher and a rogue nail gun ups the ante in almost the wrong way.
In all, ‘The Young Offenders’ is a quirky comedy with plenty of heart, but it falls apart slightly in the final act, the laughs are paced through the film but it struggles through some messy pacing. It is a delight to spend time with Conor and Jock – the two tearaways at the heart of the film – and it is clear that these are two young actors on the rise.
RATING: 4/5
Review by Brogen Hayes