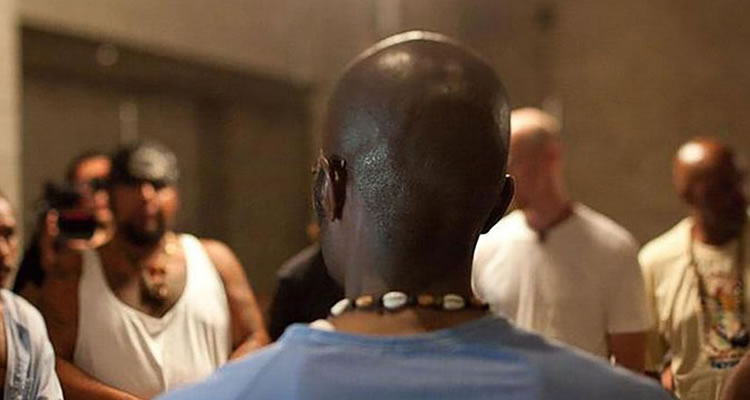 THE WORK (USA/Club/89 mins)
Directed by Gethin Aldous, Jairus McLeary.
THE PLOT: Folsom maximum security prison, California. Many of the male prisoners there are serving long terms and beyond-life sentences for violent and gang-related crimes. Twice a year though, the prisoners are given the opportunity to take part in group therapy sessions dubbed The Work, as part of a rehabilitation programme. Joining the prisoners in this one room are male civilians from ‘the outside’ who for their own, deeply personal, reasons have found themselves in this very unique situation. As the prisoners and civilians bond over their shared experiences of unfulfilled lives, a deeper understanding grows, along with a real chance to heal…
THE VERDICT: Here’s something you don’t see every day. ‘The Work’ is a compelling documentary about prison life that feels immediate and relevant, without ever feeling judgmental about its subjects. Set almost entirely in one room and focusing on one group of men of varying ages, races and beliefs, the film adopts a fly-on-the-wall aspect where the camera becomes invisible and gets in remarkably close and intimate to its subjects. It’s the stuff of great documentary filmmaking, where barriers are broken down, walls and barbed wire seem irrelevant and the only real prison is the one constructed by the prisoners and civilians in their minds.
Here are there are some tragic stories of gang members who were abandoned by their brothers once they got caught, men whose fathers ignored them or treated them with contempt, or men who are lost and directionless, looking for someone to even notice they exist. The most troubled man here isn’t even a prisoner – he’s a judgmental civilian who is battling a major demon inside him. He’s one bad argument away from being on ‘the inside’. Guided by experienced facilitators, the men draw deep from their wells of pain and regret, to hopefully find a common link among each other, to guide each other through the dark and into the light.
Co-directors Gethin Aldous and Jairus McLeary capture some truly electrifying, extraordinary footage here. A quiet young man confronts his father’s disregard for him and breaks down, letting years of bottled guilt out. Early on, there’s a sense that tensions could explode at any moment given the potentially volatile mix of men here. It’s all the more remarkable that they don’t, that they actually protect and help each other through the process. In a society that generally frowns upon men showing emotion and tears, this film is quite cathartic. It’s a primal howl of bruised masculinity, but kept in check at all times by its message of rehabilitation for those on the outside as well as the inside. This is no new-agey nonsense. The proof is there in the closing credits. ‘The Work’ is a remarkable, powerful film that simply demands to be seen.
RATING: 4 / 5
Review by Gareth O’Connor