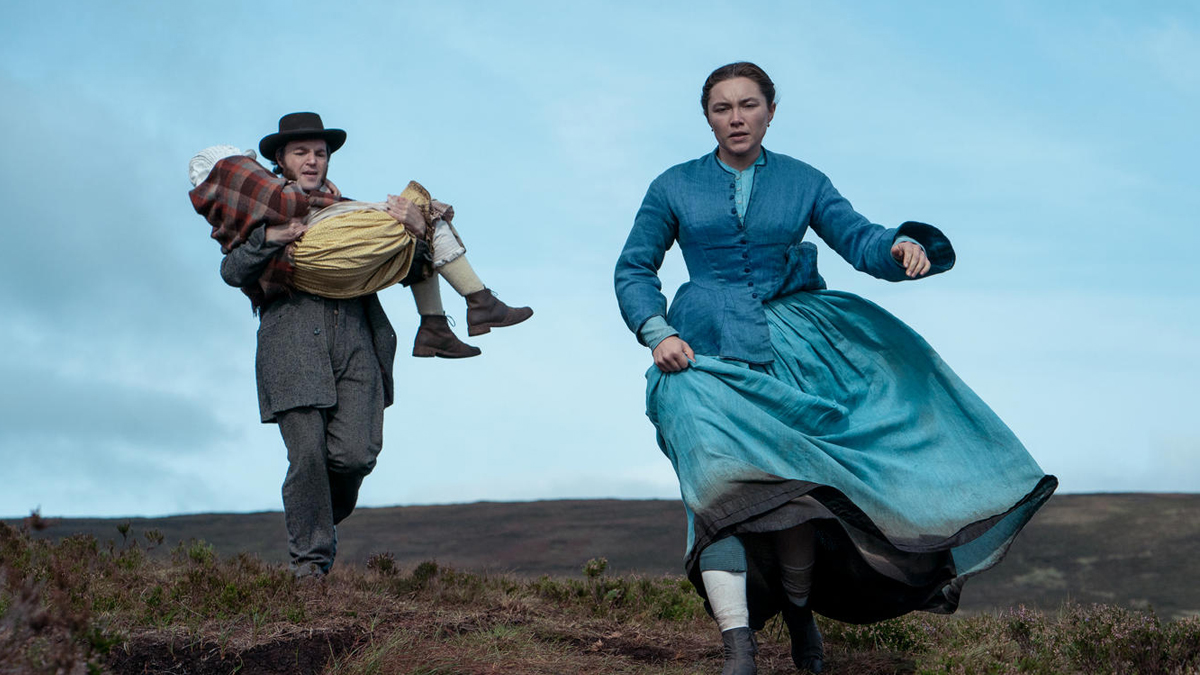 The Wonder, based on a book by Emma Donoghue, is set in the West of Ireland and stars Florence Pugh, Tom Burke, Elaine Cassidy, and her real-life daughter, Kila Lord Cassidy. The story is set in the aftermath of the famine, trauma runs deep as does suspicion. When a young girl, Anna (Lord Cassidy) hasn’t eaten in months, nurse Lib Wright (Pugh) is asked to stay with the family, observe the child, and prove what she is saying is true: that she doesn’t need food, she is being sustained by the Holy Mary. Sebastián Lelio, the Oscar winning director of A Fantastic Woman, tells us more about the film.

Why tell this story?
I made a film, Disobedience, with Ed Guiney from Element Pictures a few years ago. Ed was in touch with Emma Donoghue who wrote the novel, The Wonder. They were looking for a way to adapt the book into a movie, and they thought of me, which was unexpected, as I am a director from Chile, and this is an Irish story. I was intrigued by the context and the themes. I read the novel, and it was amazing. Lib Wright, the character Florence Pugh plays in the film, goes on an incredible journey. Politically and historically, this community is traumatised 12 years after the famine. I thought that the community collectively almost generated Anna, this girl that can somehow live without eating, as a symptom of their trauma. I was very interested in the unique relationship between the nurse and the girl, and the fascination that grew between them. It becomes a transgenerational sorority; there is maternal love, and what develops between them is very beautiful, I was very moved by that. At a more conceptual level, I was looking forward to making a film with high levels of precision. It is a film that requires a very precise script because it has elements of suspense, a thriller, and different genres and tones throughout it. Conceptually I was fascinated by the fact that this is also a film about the collision between belief systems, which has always interested me; you can see it in my work in Disobedience and A Fantastic Woman. Reason versus religion or against religion, rationality versus magical thinking, and fact versus wishful thinking are all subjects that I often think about. This is a story about the power of fiction, not just the story, but also the power of fiction in our lives. The stories we tell each other, to ourselves, the stories we create, the stories we inherit, and the stories we choose to respond to all play a part in everyday life. I was interested in the coalition between this extreme community that could be considered fanatical because it is composed of people who are not willing to move from the position they choose and are willing to bend reality to fit what they think is the truth. Then you have the intellectual elasticity of a character like Lib, who is a scientifically minded woman and holds within her the attitude of doubt and questioning because the thing about science is that it is at its glory when it is corrected. Science is the opposite of absolute rigidity. In a way, it made the film about today; we are in an era of fake news, the Internet has every belief, and you will find millions of people following the craziest ideas that have no grounding. People will follow a dangerous leader who tells a story that captivates the masses. For all those reasons, there were so many levels to work with on the film. It presented me with problems, and I enjoy the challenge of finding solutions.

Kila Lord Cassidy is a fantastic discovery, and Florence Pugh is one of the best young actors working today. Their dynamic is powerful, and they have incredible chemistry. Did you rehearse, or did it occur naturally?
I love working with actors. I especially love working with actresses. Florence is a magnificent actress, and when she said yes to the film I knew we would be OK. Florence can carry any film, she can make her thoughts palpable. She has integrity and strong self-confidence that comes from a genuine place. We needed these qualities for Lib, so I wasn’t worried about Florence’s performance; we just needed to find the right girl. Anna’s role is hugely important to the film. She is on screen for a big percentage of it, so we depended on finding the right girl. During the pandemic, I was in Chile, and the casting agent here in Ireland was looking for girls all over the country. I would receive dozens of casting tapes a week, and I was starting to worry because the time to shoot was approaching, and we still didn’t have an actor. When I saw Kila’s tape, I was speechless because I felt that this was a real actress, but she’s not a real actress; she’s just 11 years old. She really committed to what she was doing on the tape, it’s hard to describe, but she deeply understood the character. When I learned that she is the daughter of Elaine Cassidy and that her father, Stephen Lord, is also an actor, I invited Elaine to play Anna’s mother. The film has two beating hearts; one is Florence, and the other is Kila, she is a gem.

The film opens on a soundstage; it’s very unexpected but also surprisingly moving. Why did you choose to do this?
I am a huge fan of the modernist matter tradition of the 1960s. The opening titles of Le Mépris and Fahrenheit 451 by Truffaut are two of my favourite opening credits. I love how many of Ingmar Bergman’s characters look at the cameras, take Summer with Monika as an example. I love how the negatives burn in the opening of Persona. All those gestures are extremely beautiful to me. The power in this story is in the Catholic explanation of what is going on, and I say that with respect because whether it’s true or not, that is not my jurisdiction; what I can analyse is how stories become power dynamics and therefore become about political control. That interests me, not the existence of God, but in this film, you can see how extreme religion has political power and control over the community. On the opposite side, we have Lib, the scientist confronting the rigidity of the powerful committee of men. I wanted the viewer watching the film to be part of the problem; the film is a construct, a mechanism for you to suspend your disbelief. I wanted to invite the viewer to be active and to say to them, don’t fall asleep, wake up. Who do you believe? What do you want to believe? I think this is especially important at a time when social media has become a battlefield. The Wonder is also a story of a young feminine body in dispute. Different forces, mainly masculine, are using her story for their benefit to obtain more power. The only casualty is Anna herself; that’s infuriating. I wanted to remind viewers that this is all a construct, just like any other story, so please, you decide what you believe about what you’re seeing. It’s your responsibility to analyse what you’re thinking and to determine whether the ending is happy or not, if it’s moral or not. Think about it. Decide for yourself. It’s on you to choose.

How did you get to grips with the fact that this is English, but it is English as it was spoken in Ireland in the 1800s and has a particular vernacular?
I inherited a beautiful, fully creative world that Emma wrote about in her novel. I worked with them on the script, with Emma and Alice Birch. English is not my language, but great writers and actors surrounded me. I ask them to tell me if anything sounds strange, funny, or off, let me know because there is a limit to my understanding of English. I was very open with the cast, and that was my way of overcoming any linguistic challenges.