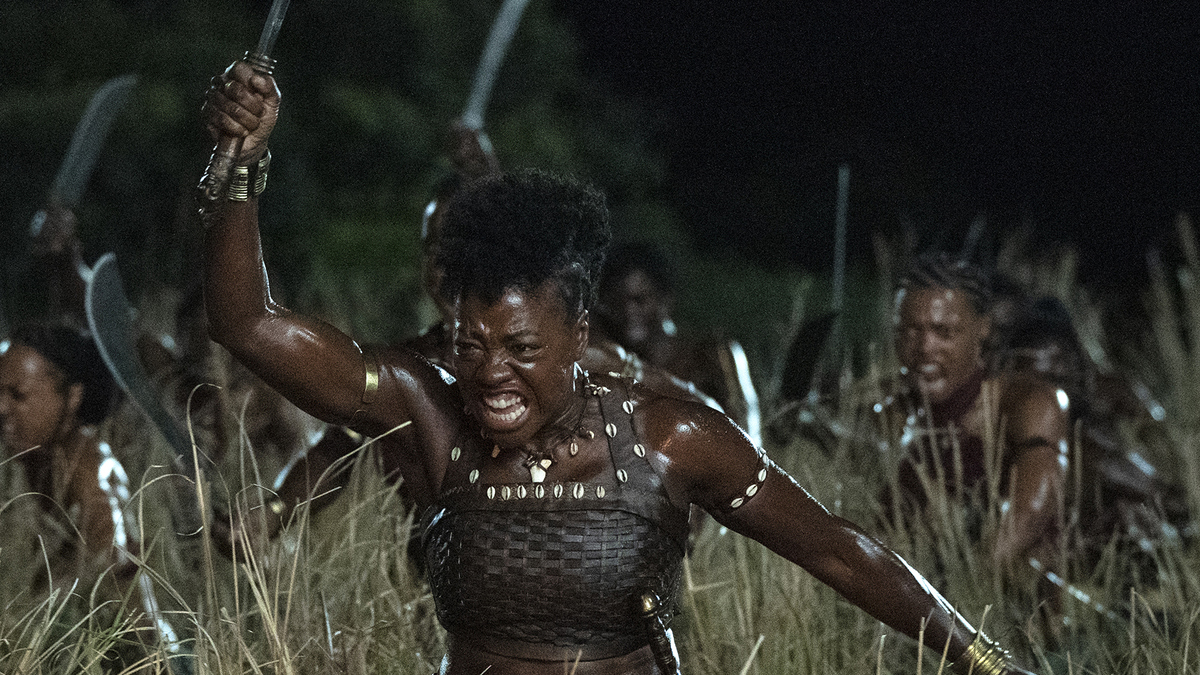 The Plot: West Africa, 1823. The prosperous Kingdom Of Dahomey is ruled over by King Ghezo (John Boyega). There are forces domestic and foreign drawing up plans against him and his territory. White traders from Portugal arrive, claiming not to be slavers. They enter an alliance with King Ghezo’s enemy and force his hand. Standing between peace and war is King Ghezo’s warrior elite – the Agojie. An all-female team of hardy warriors led by Nanisca (Viola Davis), they don’t back down in the face of fear. New recruit Nawi (Thuso Mbedu) wants to join the Agojie, but first she must prove herself worthy…

The Verdict: The Woman King has been getting a lot of buzz in the last few weeks, even becoming a box office hit in America. Rightly so, as it’s a thrilling epic with a basis in history and with crossover potential to be something more than it initially appears. Calling it a female Braveheart doesn’t do it justice. Neither do comparisons with Black Panther. While that kinetic Marvel film certainly paved the way for other stories about independent, organised African nations like this one, The Woman King defiantly moves to the beat of its own drum. It also has a strong feminine voice which rings loud and clear with a colourful tribal chant. It relates the story of the Agojie – a crack team of female soldiers empowered by their king to defend his territory and people against encroaching enemies and slavers who see Africans as commodities to be sold and shipped abroad. The Agojie were also the only of their kind in male-dominated Africa.

The script by Dana Stevens from a story by actor Maria Bello uses the story of rookie teenager Nawi as an entry point into this world. Stubborn and sometimes unwilling to follow orders from her general Nanisca, she has a fire and inner strength within her despite her slight frame. Surely a shoe-in for Best Original Screenplay, the script takes its time in establishing this world and Nawi’s place within it. It’s time well spent of course, building up the growing respect between Nawi and Nanisca even when they disagree about warfare tactics. For an unprovoked war is indeed coming to their kingdom and this tests the mettle of the Agojie. What’s interesting here is that there’s no power play or internecine conflict between Nanisca and her king. There’s a deep-rooted, mutual respect there. He has his place in politics and she has her place in warfare and defence of the kingdom, earning the title of Woman King – a curious but more empowered phrase than being a queen.

The Old Guard director Gina Prince-Bythewood stages all this with visual flair and a firm sense of pacing and direction. The action and fight scenes have some heft in them, moving between night and day and choreographed like a balletic dance of death. There’s no doubting their prowess with swords, spears and hand-to-hand combat, refusing to use the quick and simple solution of a gun. There is a Spartan and Amazonian parallel here of course, but the Agojie are very clearly rooted in African culture and its traditions. Terence Blanchard’s stirring score underlines these themes as well. The actors rise up to the challenge too, with a sturdy, physical Viola Davis performance at its core. She’s surrounded by a strong supporting cast including No Time To Die’s breakout star Lashana Lynch and the intense Sheila Atim. The Woman King is stirring stuff, hitting many of its marks dead on while keeping its characters in focus and plot moving towards self-discovery for not only this kingdom but its defiant people. All hail The Woman King!