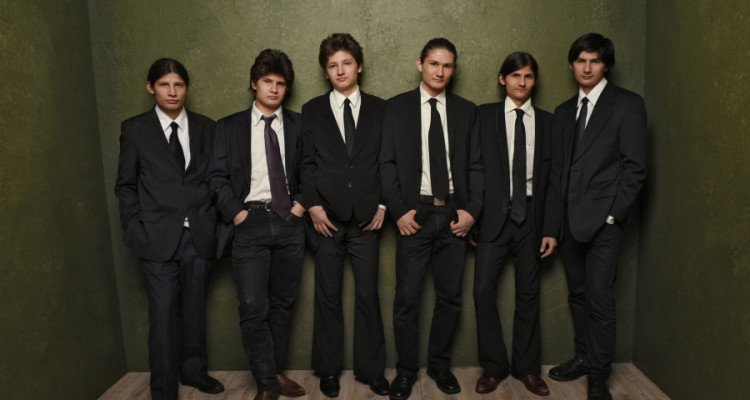 PARK CITY, UT - JANUARY 23: Mukunda Angulo, Govinda Angulo, Bhagavan Angulo, Narayana Angulo, Jagadisa Angulo and Krsna Angulo from "The Wolfpack" pose for a portrait at the Village at the Lift Presented by McDonald's McCafe during the 2015 Sundance Film Festival on January 23, 2015 in Park City, Utah. (Photo by Larry Busacca/Getty Images)

THE WOLFPACK (USA/15A/90mins)
Directed by Crystal Moselle. Starring Bhagavan Angulo, Govinda Angulo, Jagadisa Angulo, Krsna Angulo, Mukunda Angulo, Narayana Angulo
THE PLOT: Filmmaker Crystal Moselle tells the story of the Angulo family, six brothers and one sister kept away from the outside world in a Manhattan apartment. Moselle interviews the boys of the family about their lives, and their attempts to get to know the world beyond their windows through movies and eventually, escape.
THE VERDICT: There is little doubt that the story of seven siblings kept under lock and key in a Manhattan apartment for 14 years is a gripping one; these children were home schooled for fear that the outside world would contaminate them and were only allowed out into the streets a handful of times a year. The trouble is that filmmaker Crystal Moselle seems to have got too close to the family in her five years of filming them, and there are many unanswered questions by the end of the film.
Of the seven siblings, we mostly spend time with the boys; Bhagavan, twins Govinda and Narayana, Mukunda, Krisna, and Jagadesh. Their sister Visnu and their father rarely appear on camera. The story that emerges is one of a group of kids trying to find a way to live in their small apartment under a controlling influence and who found an escape and a learning through movies, so began to recreate them in painstaking detail for their own entertainment. These recreations are interesting, as it shows the glee these kids take in such recreations, but it also shows how little they have learned about the world around them.
All of the brothers are bright and engaging, and tell their story through talking heads and interviews. It seems that they are aware that their family situation is more than a little unusual and, although they say they understand the motivations of their over protective father, they often rail against him. This leaves them in an odd halfway spot then; they no longer want to be confined, but they refuse to open up to therapists assigned to them and on a rare trip to the cinema, they become convinced that someone is following them – their father’s paranoia coming out in them.
Director Crystal Moselle spent years with this family, recording them and interviewing them about their lives – she encountered them on one of their rare trips outside the apartment. The trouble is that the subject of the documentary seems more fascinating than the product itself. It is often hard to differentiate between the brothers as they all wear their hair long and look strikingly similar, and although there are moments of greatness – such as home movie footage of kids on Halloween, filmed from above, being juxtaposed with the brothers dressing up in elaborate costumes for their own celebration – it seems that the brothers are guarded. This means that Moselle seems limited in the story she can tell here, as the family will only open up so far. As well as this, it doesn’t seem that there are any answers as to why this family was confined for so long – the father just seems to have a disdain for the world and, as one of the boys says, rebels against the government by not working – and if there are answers, they are not present in this film.
In all, THE WOLFPACK is the story of seven smart and engaging kids whose childhood was about confinement and control. Although they seem to trust director Moselle, it is fairly clear that they never truly open up on camera so while it is fascinating to spend time in their world and observe their relationships, the final film is nowhere near as strong as it could be, and leaves far too many unanswered questions.
RATING: 3.5/5
Review by Brogen Hayes