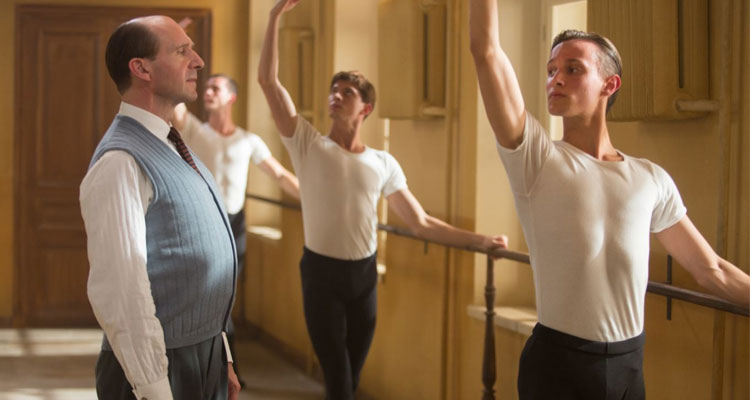 The Plot: Paris, 1961. Russian dancer Rudolf Nureyev (Oleg Ivenko) arrives in the west on a tour with the famous Kirov ballet company. Coming from humble origins, he was a forthright young man who sought out a different teacher in Pushkin (Ralph Fiennes) – whom he regards as a father figure. Ballet is about discipline, but this is not something that Rudolf cleaves to. Upon arrival in Paris, he defies his KGB handler and stays out late. Rudolf bridges the gap with French ballet dancers, ignoring rules regarding not talking to foreigners. He begins a tentative romance with Chilean heiress Clara (Adele Exarchopoulos), who is grieving the loss of her late boyfriend. As Rudolf’s fame grows in Paris, so does his notoriety with the KGB. In a desperate bid to be free, he makes a daring move to defect at Bourget Airport…

The Verdict: Ballet is a high art form, which Russians in particular have perfected to a T. Given the intense pressure and rigorous training they go through, it’s inevitable that high drama should follow – as depicted in the revealing documentary Bolshoi Babylon. Ralph Fiennes became drawn to the story of Rudolf Nureyev for these reasons – the remarkable talent of this young man balanced out with his yearning to escape the overarching, grinding influence of the Russian Government. When asked why he dances by Pushkin, Nureyev responds ‘to escape’. It’s rich material ripe for a dramatic interpretation, so the result is The White Crow. Fiennes once again gets behind – and in front of – the camera for his own take on this singular character piece. It’s about a most unusual man – the white crow of the title, an outsider.

David Hare’s carefully considered script, inspired by a book by co-writer Julie Kavanagh, pumps up these alternative viewpoints of Nureyev early on. He doesn’t conform to accepted standards and instead worships at the altar of the individual – a decidedly non-Communist doctrine espoused by the decadent west. Nureyev represents not only his ballet company but also his country, but in truth he feels more at home among the liberal French. It’s that individuality which becomes the driving force of the film. It’s not so much a film about ballet but a film about a young man who is driven to take huge risks with his reputation and future in order to escape from oppression and state-controlled influence. Fiennes mines this for dramatic effect, teasing out Nureyev’s gradual move towards defection while also portraying his KGB handler as just another man also doing his job.

Shot in France, Serbia and Russia, the film looks and sounds a treat. As he’s proven before with his previous films like Coriolanus, Fiennes has a refined taste for his subject matter and how to tell it in a way that is cinematic, accessible and thoroughly engaging for an audience. Three different timeframes are used in the film, but they’re clearly delineated with flashbacks briefly inserted at key points to show Nureyev’s rise to fame (or infamy). Fiennes takes on a subtle supporting role as Nureyev’s teacher, true to the real-life Pushkin who told his pupils that dancing is about a co-ordination of steps, one cascading into another without being rushed. When looking for his lead actor, Fiennes settled on ballet dancer and first-time actor Oleg Ivenko. Not only can he dance like he means it, but he can act too.

Ivenko gives a good performance, which is by turns earnest and direct. Fiennes moulded him into a capable actor who gets across that Nureyev spirit, though Ivenko does look visibly nervous at times. That can be put down to his screen inexperience, but it’s a decent debut that holds your attention throughout. On a recent visit to Dublin, Fiennes that admitted that he was anxious about showing his latest directorial effort to Irish audiences, as we are very discerning. True, but we also know when a talented actor/director has done his job – and done it well. The White Crow is an engrossing watch which draws you into its story, while also leaving you thirsting for more about Nureyev’s rebel spirit. Worth seeking out.