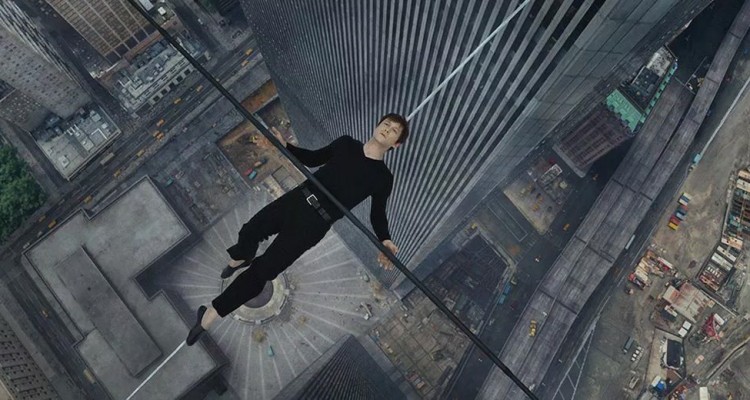 THE WALK (USA/PG/123mins)
Directed by Robert Zemeckis. Starring Joseph Gordon-Levitt, Charlotte LeBon, Ben Kingsley, Ben Schwartz, James Badge Dale, Steve Valentine, Benedict Samuel.
THE PLOT: ‘I find myself on an island, floating in mid air on the edge of the void’… On August 6th 1974, French high wire performer Philippe Petit (Joseph Gordon-Levitt) crossed a wire strung between the towers of New York’s World Trade Centre… 110 storeys up. Robert Zemeckis’ film takes us behind the scenes of this incredible feat, and into the mind of the man who seemed that the towers were built for him to dance on a wire between them.
THE VERDICT: The incredible true story of Philippe Petit’s crossing between the Twin Towers has already been told on the big screen, in James Marsh’s Oscar winning documentary ‘Man on Wire’, but Robert Zemeckis not only gives a strong insight into Petit, but also takes the audience right onto the wire with him in some truly tense and hair raising scenes.
It would seem to make sense that the character of Philippe Petit would be played by a French actor, but Joseph Gordon-Levitt has the charm, charisma and borderline arrogance to carry off such a character. The French accent used by Gordon-Levitt does jar for the first few seconds of the film, but the actor has the courage of his convictions, and makes it work. Gordon-Levitt makes the audience truly root for this charming, arrogant daredevil, and it is this audience sympathy that makes the film work, particularly in the terrifying high wire scenes. The rest of the cast support Gordon-Levitt well; Ben Kingsley stands out as Petit’s mentor and supporter and Charlotte LeBon is endearing as Annie. The rest of the cast includes Parks and Recreation’s Ben Schwartz, James Badge Dale, Steve Valentine and Benedict Samuel.
Robert Zemeckis and Christopher Browne’s screenplay – based on Petit’s novel ‘To Reach the Clouds’ – delves into the history of the walk, and where the inspiration to push himself while paying tribute to New York City comes from. The audience is taken through the life of Petit, the struggles he went through in order to become a performer, and the successes he had along the way, such as walking a wire between the towers of Notre Dame in Paris. The film is zippy and fun, flirting with danger and allowing the audience to fall a little in love with Gordon-Levitt’s character. As well as this, the film shows the planning and care that went into planning the walk, and what happened when things began to go wrong.
As director, Robert Zemeckis almost makes THE WALK feel like a circus; colours and music abound in the first half of the film, making it feel bright and cheerful by carefully blending black and white images with full, vibrant colour. The pacing the of the film struggles a little as it moves from the past into the present day of the film, and Philippe and his accomplices get into planning the actual walk from New York City. This all changes, however, when Petit steps onto the wire, and takes his first steps over ‘the void’ between them. What follows is a master class in tension, as Zemeckis ramps up the fear and apprehension as Petit becomes increasingly more confident on the high wire. Bringing the audience onto the sire not only adds to the tense feeling of the end of the film and shows off the film’s beautiful and loving cinematography, but proves the strength of the first half of the film, as it is nearly impossible not to root for Petit as he takes his time on the wire.
In all, THE WALK is a master class in tension; the audience is brought right onto the wire with Petit, which truly hammers home the foolhardy bravery it took to complete this performance. Gordon-Levitt is both charming and arrogant as Petit, the cast back him up well and the cinematography is simply beautiful. One stumble in pacing aside, this exhilarating and terrifying movie is quite simply the best we have seen from Robert Zemeckis since ‘Cast Away’ 15 years ago.
RATING: 4/5
Review by Brogen Hayes