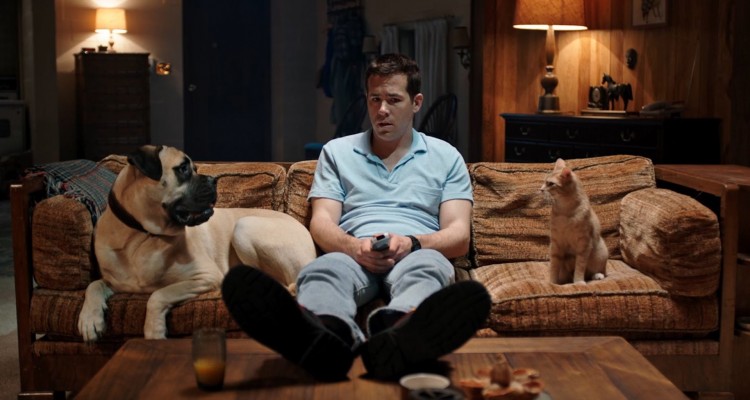 THE VOICES (USA | Germany /16/103mins)
Directed by Marjane Satrapi. Starring Ryan Reynolds, Anna Kendrick, Gemma Arterton
THE PLOT: Jerry (Ryan Reynolds) seems like a normal, but quiet and socially awkward guy, who is just trying to get through his workday at the candy coloured factory where he works, to get home to his pets. The truth is, that Jerry’s pets talk to him – one evil, and one rather sweet – but this is not a problem until Fiona (Gemma Arterton) stands him up on their first date…

THE VERDICT: Ryan Reynolds reminds us that he is a strong actor with his role as Jerry in THE VOICES; combining sweetness and naivety with the desire not to make people unhappy means that Jerry has all the emotional tools to be an accidental killer and, combined with a history of mental illness in his family and an angry Scottish cat, Jerry takes a step over the edge. Reynolds keeps the audience on Jerry’s side throughout the film, and even when he realises the depths of his illness, his contrition and fear is so strong that the audience stays with him throughout. Reynolds also does a great job with the voices of the various animals who talk with Jerry throughout the film; his Scottish accent is surprisingly passable. Gemma Arterton does a great job of playing the wholly unlikeable Fiona, making her just rude and fake enough for the people around her to believe she is a good person. Anna Kendrick is wonderful and Lisa, a character who is all sweetness and light.

Michael R. Perry’s screenplay – which appeared on the Hollywood Blacklist in 2009 – treads lightly around the issue of mental illness, never judging Jerry for his actions and keeping audience sympathy with the lead character. Having the dog and cat as the angel and devil on Jerry’s shoulders is a touch of brilliance, and leads to a lot of foul mouthed language from the cat – hilariously named Mr. Whiskers. Setting the film in a small US town allows the characters to be sweet and warm, and although the film falls apart slightly in the final act, it is the contrast between this and the blood soaked world that Jerry finds himself in that makes the film work.

Marjane Satrapi approaches the gory and violent subject matter with apparent glee, and creates a wonderful balance between the candy coloured public life and the dark personal life that Jerry leads. There is something of The Coen Brothers about Satrapi’s direction, but she makes the film as darkly funny as possible, allowing the violence and comedy to keep the audience guessing throughout the film. The film does collapse in on itself slightly in the final act, but Satrapi has created a twisted and funny film that is reminiscent of The Coen Brothers and the dark comedies directed by Danny DeVito. As well as this, the use of colour throughout the film is a work of brilliance, making THE VOICES feel like a cross between CHARLIE AND THE CHOCOLATE FACTORY and CHEAP THRILLS.

In all, THE VOICES is violent, gory, twisted and messed up, but it is also a sweet and funny film that allows Kendrick, Reynolds and Arterton to shine. The final act is a bit of a mess, but the tone prevails, making THE VOICES the most stylish and violent comedy of the year.