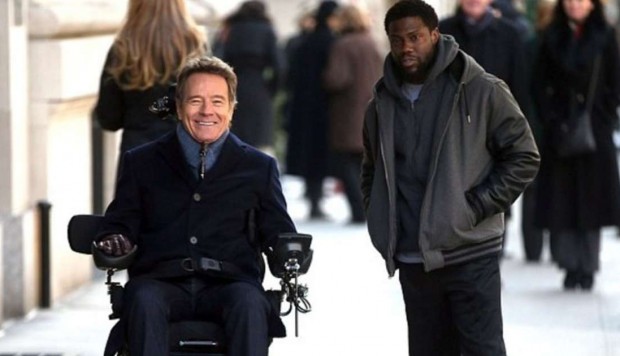 In short: More of a downside

The Plot: Wealthy New York businessman Philip (Bryan Cranston) is a quadriplegic, paralysed from the shoulders down. Yvonne (Nicole Kidman) looks after his business affairs, but he needs a full-time, live-in carer. This is where Dell (Kevin Hart) comes in. An ex-convict who barges his way into an interview, Dell is anything but subtle. This is what draws Philip to him, the fact that he’s unlike any other candidate and has no real qualifications for the job. In the most unlikely of circumstances, they become firm buddies and Dell inspires a new lease of life in Philip…

The Verdict: It’s the New Year and an ideal time for something life-affirming to beat those January blues. That was presumably the intention around releasing The Upside, but it’s not likely to bother Oscar voters. It’s based on a true story, but is itself a remake of the 2011 French heart-warmer The Intouchables. That was an unashamed crowd-pleaser, a film that had cross-over potential for people who don’t normally go to French films. As you can probably imagine, it has all the subtlety you can muster from an American remake i.e. very little. It aims more for crude laughs rather than tugging at your heart-strings, with the result that it’s much ado about nothing.

The main problem resides in Jon Hartmere’s weak script, which tries to transpose the story to an American setting but loses something in the translation. Dell and Philip are thinly-sketched characters at best, even though we spend over 2 hours with them. Dell has an estranged wife and child, but they barely feature and seem more like props to hang on Dell’s character description sheet. Philip doesn’t even notice how much Yvonne cares for him, wallowing in his own self-pity about his situation rather than doing something positive about it. That makes for a very odd couple relationship. The class and racial boundaries of the original, which carefully melted away while melting our hearts, don’t factor in here. Instead, there are endless gags about Philip’s crotch. Right.

Cranston and Hart do what they can, but there’s a distinct impression that neither actor is firing on all cylinders here. The script isn’t three-dimensional enough to give their characters room to breathe, so the chemistry doesn’t fizzle in the way one would hope for. Kidman is the saving grace of the film though, bringing warmth and compassion to an otherwise under-written character. More of her and less of Hart’s pratfalling with a hi-tech shower would have been welcome. Director Neil Burger’s direction is uninspired, making for more of a downside rather than the uplifting story it’s meant to be. You’d be better off tracking down the 2011 original and then following that up with the cracking wedding-themed C’est La Vie, the most recent offering from the same team. Let’s hope that’s not subject to an American remake either.