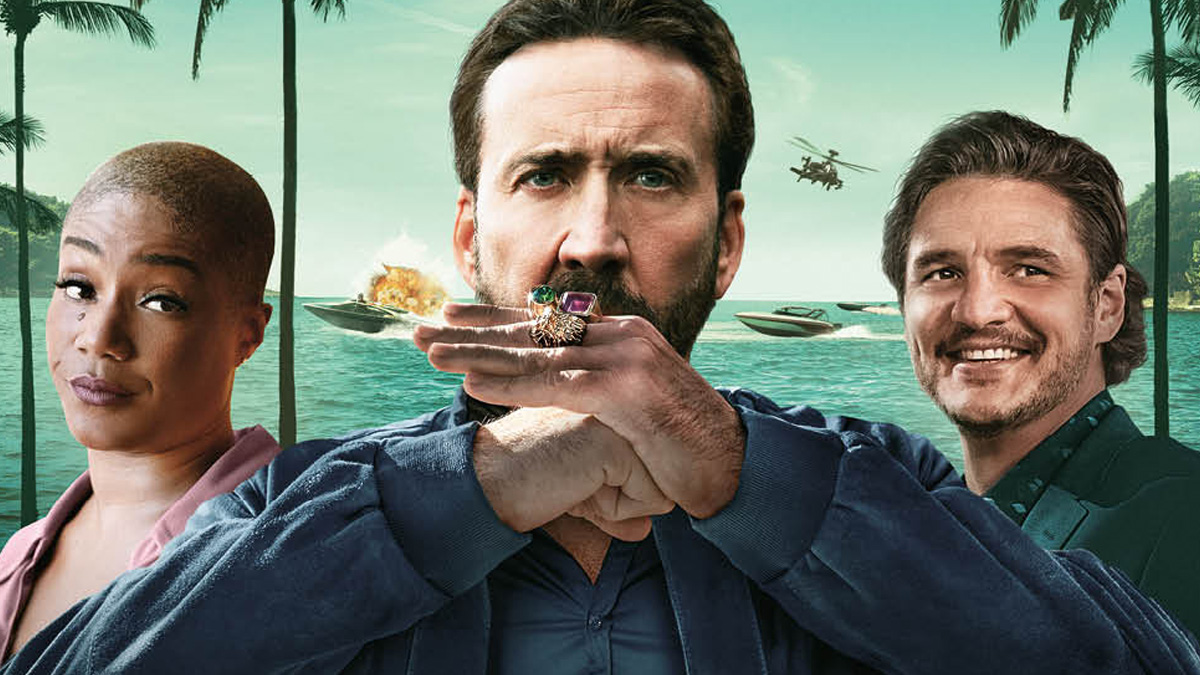 The Plot: The actor Nick Cage (Nicolas Cage) is holding out for that one role that will be his defining moment in the film industry. After that, he’s planning to pack it all in and retire. He has visions of his younger self urging him to embrace his public persona and be the movie star rather than the actor. His agent Richard (Neil Patrick Harris) has a job for him to show up at the birthday party of Javi (Pedro Pascal), a Spanish millionaire and fan. The duo bond over drinks and their shared love of movies, with Javi introducing him to the wonders of a certain family film. However, CIA agents Vivian (Tiffany Haddish) and Martin (Ike Barinholtz) have another job for him – to spy on Javi, who they suspect is involved with the kidnapping of a government official’s daughter…

The Verdict: It’s finally here – the film about a certain actor amusingly sending himself up, Being John Malkovich-style. The unwieldy-sounding title of The Unbearable Weight Of Massive Talent is something of an in-joke, given that its star performer – one Nicolas Cage – seems to comfortably handle the fame and adoration of being a well-known, Oscar-winning actor in tandem with his own unique rockstar persona. He’s Nic Cage, man. There is nobody else quite like him, except perhaps for his onscreen alter ago here Nick Cage – that’s with a k. Like his Con Air co-star Malkovich, Cage plays ‘a version’ of himself here in this madcap spy caper that also doubles as the ultimate Cage Rage film. We know this because he’s married to make-up artist Olivia (Sharon Horgan) and his daughter is played by Kate Beckinsale’s daughter Lily Sheen (Cage actually has two sons). What’s fact and fiction here then? Part of the film’s fun is how it plays around with Cage’s public and private personas, rather than go straight. That would be too close to the bone.

Director Tom Gormican and his co-writer Kevin Etten somehow concocted this mad but affectionate ultimate tribute to the actor, mixing in lots of cinematic easter eggs and prayed that he would like the concept enough to run wild with it. The alternative was no film at all. Thankfully, Cage responded to the script and engaged with its anarchic but tongue-firmly-in-cheek tone. It is a thing of beauty though. The script is cleverly constructed to become not just a film about Nicolas Cage and his massive talent, but also about becoming a more than bearable film in which Cage finds himself the star of his own real (read: movie) life adventure that crisscrosses that fiction/reality divide. It’s deep meta filmmaking but with a sensibility that knows exactly how to navigate through some potentially choppy waters. Placing Cage the actor inside his own screen adventure might sound like a vanity project at first. Any such concerns are comfortably batted away by Gormican by essentially making it a bromance movie in which Cage bonds with superfan Javi, they talk about their top three movies, drop acid together and get into all manner of scrapes. And that’s just for starters.

Also in the mix is Nicky Kim Coppola (another in-joke, given his heritage), his Wild At Heart-era self who pops up at various intervals to get Nick’s mojo going again – or to make out with him. Yes, actually. Cage is so game here that he’s not beyond something as outlandish as that. Though, the film stops short of introducing further Cage variations from the multiverse – maybe that will be saved for a future Marvel film if they respond to his recent call. Cage is a delight throughout, playing into audience perceptions and expectations of himself but also showing more of that introspective Cage of late as in Pig. It’s a portrait of the actor in various shades, all of them true to his nature but with a meta angle written and directed from a fanboy’s perspective that knows what makes him tick. Pairing Cage with Pedro Pascal works a treat, the two actors bouncing off each other like beachballs just wanting to have fun in the Spanish sun (well, Hungary and Croatia for budgetary reasons). Their bromance is what roots the film in some sort of movie-like reality, thereby making it a far more palatable and relatable experience.

The Unbearable Weight Of Massive Talent shouldn’t really work as well as it does. It’s a film about Nick Cage wrapped up in the kind of film that Nic Cage would respond to, but is ultimately about Nicolas Cage being the gamest actor of the year, maybe even the last two decades in poking fun at himself (‘Not the bees!’ even slips in). Nic Cage uncaged then? It’s not as head-melting as it sounds. There’s much to unpack here, but it’s done in such a light, hilarious, action-packed and thoroughly engaging way that you won’t notice the joins. Cage has only gone and re-invented himself again. Long may he continue to confound expectations and surprise us all. An infectious delight that will leave audiences grinning as the credits roll.