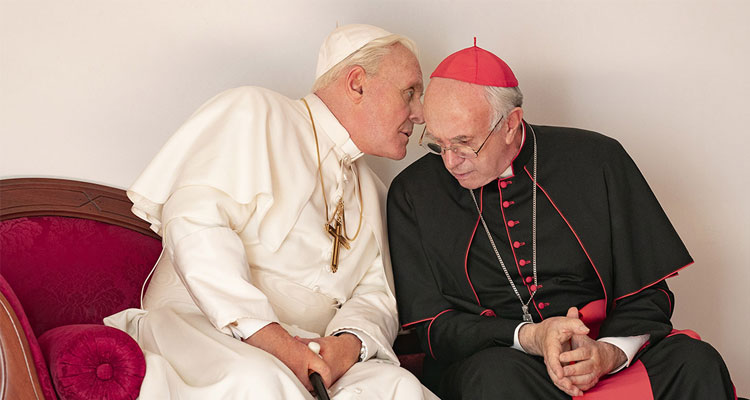 The Plot: Pope John Paul II has died. The Papal Conclave convenes and elects Pope Benedict (Anthony Hopkins) as his successor. Pope Benedict believes in following tradition and maintaining the Catholic Church’s rigid stances on hot potato issues affecting modern society. Several years later, Cardinal Bergoglio of Argentina arrives at The Vatican to discuss an urgent matter with Pope Benedict. The two know each other well and have a mutual admiration and respect, even if their views on the future direction of the Church are completely different. Pope Benedict has some news of his own to deliver to Cardinal Bergoglio, news which takes him by surprise…

The Verdict: In the space of a year, Netflix has gone from being the unconventional outsider in the film industry to a force to be reckoned with. While they have distributed a number of films on their platform for a few years now, the stunning Oscar-winning Roma changed everything. It made the film industry sit up and take notice. Netflix is serious about making quality films and a number of them have already becomes Awards Season contenders, like the superb Marriage Story. There’s no dip in quality with their latest entry, The Two Popes. Inspired by real events, it imagines the private conversations that might have occurred during several meetings of two great minds, the ailing Pope Benedict and his humble successor Pope Francis.

Screenwriter Anthony McCarten has proven himself adept at handling real-life characters like Winston Churchill in Darkest Hour. Here he tackles two very different men who have their own ideas about how the Church stays relevant and tackles internal issues. Pope Benedict is conservative, preferring to toe the party line on centuries of Church edict. Pope Francis is more of a maverick, encouraging change and taking a less reverential attitude to ancient papal traditions. He positions his two characters not as opposing forces vying for power but as two friends who enjoy each other’s company, challenging and provoking each other to change their attitudes but in a respectful manner. That’s the greatest strength of this warmly engaging film, which has a quiet power running behind the many dialogue-heavy scenes.

Brazilian director Fernando Meirelles (The Constant Gardener) returns to feature directing for the first time in 8 years. He’s picked a cracking script to work with and two lead actors who know how to fully invest in their characters. We already know that Hopkins and Pryce can do these kinds of authorative characters in their sleep, but they bring a very human, rounded-out quality to their performances. Amidst the theological and existential discussions about the role of the Pope and the Church, Meirelles lets them kick back over pizza and a World Cup final match between their respective countries. They are, after all their divine gifts, just mortal men tasked with the holiest of holy jobs. That makes them more relatable, rather than distant figureheads.

Meirelles strays from his main story occasionally for flashbacks regarding Cardinal Bergoglio’s past. They’re overlong, but do provide some substance to his backstory. The film is at its most engaging when Hopkins and Pryce are onscreen, their natural chemistry together meaning that one could easily continue watching them chat and challenge each other for another half hour. The Two Popes is divine viewing as a result. Not a stuffy biopic or a cerebral talk-fest, it is instead a rather hopeful and celebratory film about two friends who have the power to initiate change.