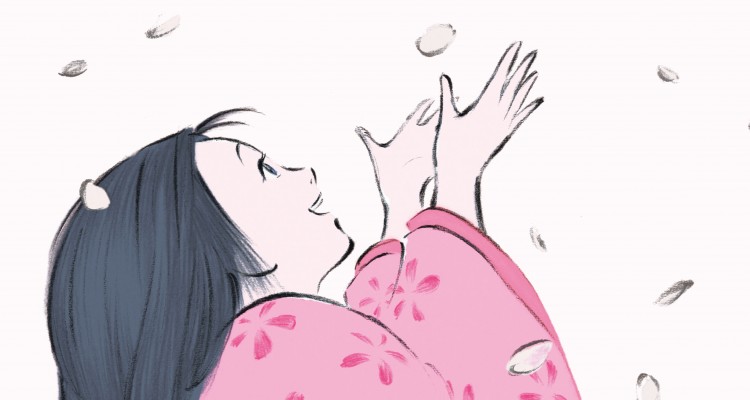 The Tale of Princess Kaguya

THE TALE OF PRINCESS KAGUYA (Japan/PG/137mins)

THE PLOT: It’s 10th century Japan, and humble bamboo cutter Sanuki finds a new-born baby, arriving in a shaft of light. Within hours of bringing the little girl home to his wife, the baby grows before their very eyes. It doesn’t take long before their little girl is busy playing with the local kids, one of them, Sutemaru, quickly become her favourite. When Sanuki also finds gold and fine clothes in the bamboo shoots, he vows that their little girl will live like a princess – and he soon whisks the entire family away to live in the city, in their shiny new mansion, complete with servants and a nanny to teach their little girl how to become a true aristocrat. Now officially named Princess Kaguya, news of the young girl’s beauty soon spreads through the entire country. As the suitors come knocking on her door, Kaguya continues to pine for the simple, carefree life she led back in the forrest…

THE VERDICT: It seems pretty fair that veteran Japanese animator Isao Takahata should be described by his Studio Ghibli co-founder Hayao Miyazaki as “a real slugabed sloth”. It has been 15 years since his last feature, after all.

The two old friends put Ghibli on the map 25 years ago, with the double-bill of Miyazaki’s MY NEIGHBOUR TORTORO and Takahata’s GRAVE OF THE FIREFLIES. The plan here was to have them repeat that trick, with THE TALE OF PRINCESS KAGUYA originally planned to open alongside THE WIND RISES (2013), supposedly Miyazaki’s swan song. Despite a five-year headstart on Miyazaki, Takahata missed the deadline. By two years.

As is so very often the case with such artists, it’s been very much worth the wait, Princess Kaguya abounding and astounding with its lightness of touch, as Takahata employs water colours, seemingly hasty brushstrokes, woodblock and scroll art to tell this very ancient folk tale, the oldest recorded in Japan’s history. There’s a handmade quality to this stunning film that allows this slightly long and sometimes slightly bonkers old tale about a princess who was so much happier as a pauper.

PRINCESS MONONOKO meets THE PRINCESS DIARIES, with just a hint of Princess Jasmine,THE TALE OF PRINCESS KAGUYA is truly beautiful and deeply beguiling, and surprisingly funny too. And it comes with a valuable lesson too – be careful what your parents wish for you.