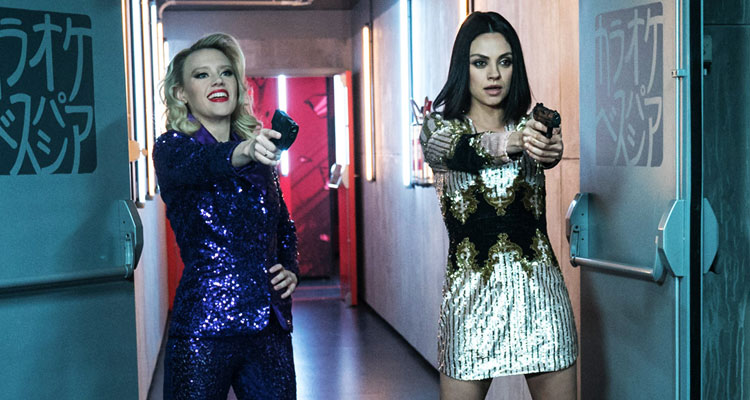 The Spy Who Dumped Me

The Plot: After a year together, Audrey (Mila Kunis) is dumped via text by boyfriend Drew (Justin Theroux). Unknown to her, he’s actually a CIA spy who gets caught up in all manner of international scrapes. He shows up unexpectedly and hands her an important package that he needs delivered to Vienna. Thrust out of her usual routine, Audrey teams up with her best gal pal Morgan (Kate McKinnon) on a trip to Europe. Along the way, the duo will encounter other agents such as suave Sebastian (Sam Heughan) and deadly assassins, all out for the same package…

The Verdict: The Spy Who Dumped Me – a lazily-titled comedy thriller that doesn’t exactly inspire confidence. The title is obviously spoofing a certain Bond film, but the impression is that of screenwriters doodling some potential titles and picking a reject. It’s a pleasant relief then that this film is marginally better than either its title or trailer suggests. That’s down to a combination of smart writing from director / co-writer Susanna Fogel and David Iserson, along with spirited performances from its leads. Like the hilarious Melissa McCarthy vehicle Spy, it’s a female-driven espionage film with a fish-out-of-water element.

Part of the charm of the film is in the central friendship between best buds Audrey and Morgan. Had these funny, likeable characters been handed to two lesser actors, they might not have been able to convey that strong bond and knowing tolerance of each other’s quirks. Kunis is essentially playing the straight woman to the joker in the pack – McKinnon. Their magic chemistry is palpable, playing off each other’s mannerisms and a truthful depiction of female friendship.

While Kunis is solidly reliable, McKinnon really brings the film to life. She judges the dramatic and comedic beats with precision timing, delivering some great lines. She has the screen presence and eye for physical comedy that her contemporary Amy Schumer sorely lacks and needs to pay attention to. Why isn’t McKinnon a bigger star already? She could be the next Sandra Bullock. On the evidence of this film alone, someone in Hollywood needs to trust her with a lead role and let her run with it.

Not all the film works. The plot is unnecessarily convoluted, adding too many elements into the mix (just who is conning who?). The plot hops around like a rabbit between European cities, even faster than a Bond film or any spy film for that matter. It’s also a good twenty minutes too long for a film of this type. A tighter edit would have yielded better pacing and less of the grinding plot mechanics. That said though, The Spy Who Dumped Me coasts on the charms of Kunis and McKinnon, delivering a frequently funny and outrageously violent take on the spy genre with a welcome female twist.