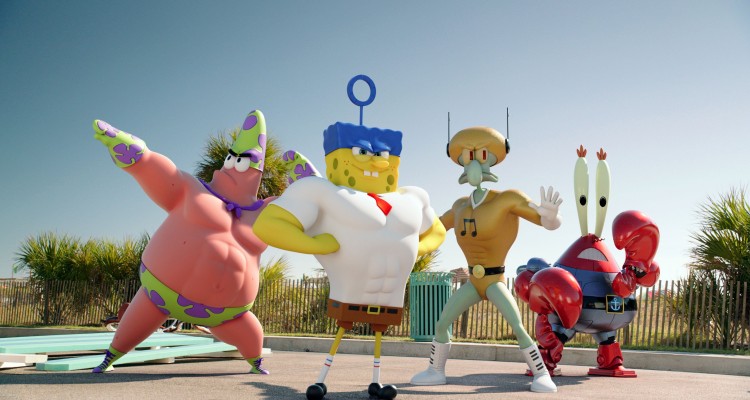 The Spongebob Movie: Sponge Out of Water

THE SPONGEBOB MOVIE: SPONGE OUT OF WATER (USA | India | Malaysia | Canada | Australia/G/92mins)
Directed by Paul Tibbitt. Starring Antonio Banderas, Tom Kenny, Mr. Lawrence, Matt Berry, Bill Fagerbakke, Rodger Bumpass, Mr. Lawrence, Jill Talley, Clancy Brown, Carolyn Lawrence
THE PLOT: When the secret formula for the Krabby Patty is stolen, all eyes in Bikini Bottom turn to the evil Plankton (Mr. Lawrence), but SpongeBob (Tom Kenny) knows his nemesis is innocent, and sets out to reclaim the formula before the town descends into chaos. What SpongeBob doesn’t know, however, is that the dread pirate Burger Beard (Antonio Banderas) is behind the theft, and to reclaim the formula, the gang will have to go where they have rarely gone before; dry land.

THE VERDICT: Eleven years after the first SpongeBob movie, our favourite underwater sponge is back on our screens, and the good news is that the film is as whacky and weird as you could hope.

Tom Kenny, Bill Fagerbakke, Rodger Bumpass, Mr. Lawrence, Jill Talley, Clancy Brown, Carolyn Lawrence and Sirena Irwin are all back as the voices of our favourite characters, and they do a wonderful job with the film, keeping the comedic timing tight and a sense of wonder and fun about the characters. Antonio Banderas is on wonderfully camp form as the pirate Burger Beard and is not above slapstick, silliness and mugging for the camera, and this is what makes his character work. Matt Berry also makes an appearance as the voice of a magic dolphin, in a piece of casting genius.

Glenn Berger and Jonathan Aibel’s screenplay is in keeping with the world of the SPONGEBOB TV series – Plankton wants the formula for the Krabby Patty, and is willing to do the most harebrained things to get it – but then extends this into a world of wonder and sheer mayhem that includes journeys into SpongeBob’s brain, dinosaurs and time travel. The dialogue is succinct and funny, with recurring gags from the TV show cropping up – ‘My legs!’ – and references to cult classics of the past, including Sean Connery’s ZARDOZ.

Director Paul Tibbitt keeps the film moving at a breakneck speed, which means the laughs keep coming, although sometimes the jokes don’t land until after a scene has ended. Tibbett also keeps the energy of the film high, the characters as we remember them, but open to being embraced by a new generation of fans. No mean feat.

In all, THE SPONGEBOB MOVIE: SPONGE OUT OF WATER is as zany, madcap, fast paced, funny and sweet as we could hope from a SpongeBob film. Antonio Banderas and Matt Berry’s cameos are fantastic and the story is just outlandish enough to keep in with the SPONGEBOB TV show, but there are times when the film is simply too fast, leaving the audience scrambling to keep up with some of the more throwaway gags. Still, it’s great to have SPONGEBOB back, and on fantastic form.