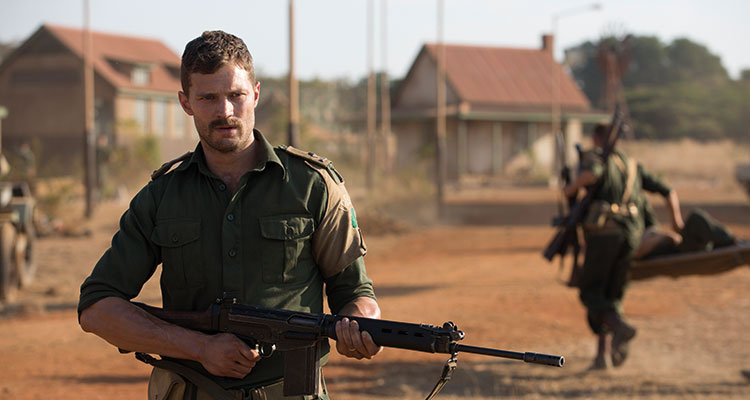 The Siege of Jadotville

THE SIEGE OF JADOTVILLE (Ireland|South Africa/15A/108mins)
Directed by Richie Smyth. Starring Jamie Dornan, Mark Strong, Jason O’Mara, Michael McElhatton, Amy Louise Wilson
THE PLOT: In the early 1960s, as both sides of the Cold War vied for control of the newly created Republic of the Congo and the rich minerals the country was home to, Irish peacekeeping troops were sent to the country by the UN to keep watch at the Jadotville compound. After a military operation goes wrong, the Irish troops suddenly find themselves laid siege to by French and Belgian mercenaries. Outnumbered and outgunned, it seems that help is not on the way.
THE VERDICT: Based in true events and the novel ‘The Siege at Jadotville: The Irish Army’s Forgotten Battle’ by Declan Power, ‘The Siege of Jadotville’ serves as recognition for Irish soldiers whose brave standoff was swept under the carpet after they were forced to surrender. The film is actually a Netflix Original, but after a successful screening at the Galway Film Fleadh, ‘The Siege of Jadotville’ is getting a release in Irish cinemas.
Jamie Dornan leads the cast, and is backed up by Mark Strong, Michael McElhatton, Mikael Persbrandt, Amy Louise Wilson and Jason O’Mara. All of the cast are fine in their roles, but this is not really a character driven film, but one that focuses on the shoot ‘em up siege in the middle of nowhere.
Kevin Brodbin’s screenplay is sufficient for the most part, but a little more attention could have been paid to the history of the conflict in the Congo, and the events that led to the siege in Jadotville since pieces of the puzzle only fall into place towards the end of the film. The Irish troops are shown as plucky and strong, and the dialogue between them feels real and relatable.
As director, first timer Richie Smyth does well with the action sequences in the film; these are exciting and fast paced and, since this is a story that was suppressed for so long, keep the audience at the edge of their seats. The background of the conflict is dealt with with less care, and this is where the film falters, and although we root for the Irish soldiers as a group, no one of them is brought properly to the fore, so we are never truly given a central character to root for.
In all, ‘The Siege of Jadotville’ is an important story, and it is great to see a story kept secret finally make it to the big screen. The set pieces are well created and the cast do well in their roles, but greater attention to characters and the background to the conflict in the Congo would have made for a stronger and more engaging film.
RATING: 3/5
Review by Brogen Hayes