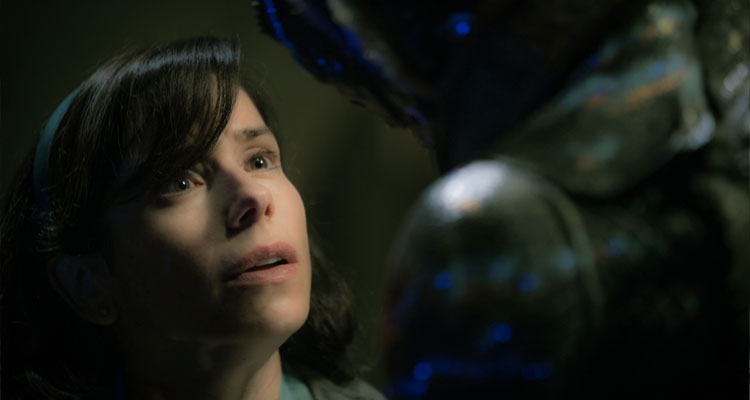 The Shape of Water

THE SHAPE OF WATER (USA / Canada / 15A / 123 mins)
Directed by Guillermo del Toro. Starring Sally Hawkins, Michael Shannon, Richard Jenkins, Octavia Spencer, Michael Stuhlbarg, Doug Jones.
THE PLOT: Baltimore, the 1960s. Elisa (Sally Hawkins) is a mute cleaning lady who works at a top secret Government research facility. She lives above a cinema that shows biblical epics with world-weary artist Giles (Richard Jenkins). Elisa is an unassuming person, the kind that is hardly noticed by others. However, she’s certainly noticed by the new ‘asset’ that arrives. The asset is a sea creature (Doug Jones) from South America, where the locals worship it as a god. It was captured by security man Richard (Michael Shannon). He thinks it’s nothing more than a savage beast and beats it accordingly. However, Elisa comes to realise that the ‘it’ is really a ‘him’ – a breathing, thinking, feeling lifeform. Unafraid of him, she forms a bond that transcends species…
THE VERDICT: Guillermo del Toro has always been fascinated with monsters, otherworldly creatures and the magical possibilities of cinema to give them other qualities. Heavily influenced by legendary special effects master Ray Harryhausen, del Toro has always had the ability to give his creatures a sympathetic, almost human aspect. ‘The Shape Of Water’ is no different, but here he takes it another level which makes it one of his most poetic films.
On a surface level, it bears some similarities to schlocky B-movie ‘The Creature From The Black Lagoon’, with a dash of ‘Splash’ and more than a hint of ‘Beauty And The Beast’. However, del Toro’s script with Vanessa Taylor is entirely original and entirely in tone with his lyrical style of filmmaking. The setting has a Cold War background and features a character who might be a Russian spy. Racism and intolerance is also in the air. While del Toro acknowledges that it exists in this time period, it’s also counterbalanced by compassion and a need for belonging. For this is a story about inter-species love (was Beauty And The Beast any different?).
The script is so well-written that it requires little dialogue to easily make the transition from a possible mad scientist film to a tender love story. Major credit for this must go to Hawkins, who was del Toro’s only choice for the role of Elisa. As she so ably demonstrated in ‘Maudie’ last year, she has a natural ability to get to the humanity of her characters in just one or two scenes. Despite the presence of Richard, Elisa is not so much lonely but alone. With no dialogue and only using sign language, it’s all her in face – whether it’s curiosity, mischievousness or keeping a poker face when confronted by Shannon’s Government stooge. It’s a terrific performance, certainly worthy of awards attention.
The startling creature design harkens back to ‘The Creature From The Black Lagoon’, but also recalls Abe Sapien from ‘Hellboy’. Once again played by del Toro’s go-to creature guy Doug Jones, it’s a curious but entirely credible character – both non-human and human at the same time. There’s a playful sense of humour to the character too, so when that transition to a love story comes it feels like it’s necessary for the plot to keep moving. That’s not all though – del Toro even boldly adds in a brief but charming musical number. Eat your heart out, Busby Berkeley.
It may be a bit unsophisticated to release ‘The Shape Of Water’ on St Valentine’s Day, as it’s a sweet, lyrical film that deserves a less obvious ploy for audience attention. Yes, it’s a romantic film with a very different twist, but it’s undoubtedly light years ahead of the latest Fifty Shades film. There’s a wistful quality to it that is very del Toro, a fairytale for adults in which things are never quite what they seem. One of the year’s most beautiful films, ‘The Shape Of Water’ is a fishy tale that comes highly recommended.
RATING: 4 / 5
Review by Gareth O’Connor