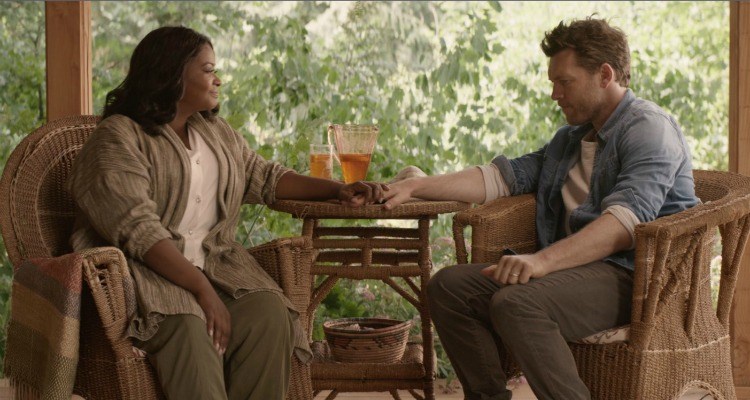 Movie Review
THE SHACK (USA/ 12A/ 132 mins)
Directed by Stuart Hazeldine. Starring Sam Worthington, Octavia Spencer, Radha Mitchell, Tim McGraw, Alice Braga.
THE PLOT:  Mack (Sam Worthington) is a mid-western man who has come from a troubled childhood background. Yet, he made good and is now happily married to Nan (Radha Mitchell). He also has a son and two daughters. On a camping trip, his youngest daughter goes missing in the woods. Police later find her red dress in an abandoned shack. With his daughter missing and feared dead at the hands of a child killer, Mack blames himself for not watching her closely. Several years later, Mack is still consumed by grief and guilt. He finds a letter in his mailbox from ‘Papa’, his youngest daughter’s name for God. He returns to the scene of the crime, where he finds something altogether different. God (Octavia Spencer) wants to talk to him…
THE VERDICT: The latest faith-based film from the US is another head-scratching cocktail of magical realism and wish-fulfilment that stretches the imagination to breaking point. Based on the book by Canadian author William P. Young, the modestly-titled ‘The Shack’ asks the audience to suspend disbelief, before then pulling the rug from under their feet. It could also be called ‘My Wild Weekend Retreat With God’.
Mack turns up at the shack to find an idyllic woodland / lakeside house where God is played by Octavia Spencer (Who else? Were you expecting Anthony Hopkins?). She has a daughter who collects human tears (stop sniggering) and lets her garden run wild, while her son is a carpenter who likes to walk on water. Okay. God wants to heal his pain, helping him to understand what happened to his daughter and why evil is still allowed to exist in the world. Mack also gets to talk to cave-dwelling spirit Wisdom (Alice Braga) and watch a magical light show, wherein he’s re-united with a face from the past.
This film really has to be seen to be believed. A literal leap of faith is required, but even then it becomes too much to take in. The idea of a grieving father encountering God is actually an intriguing one, but director Stuart Hazeldine blows any chance of making it meaningful. Instead of being a soulful exploration of the grieving process, it becomes a spiritually bankrupt depiction of a religious fantasy. All Mack really needs is some grief counselling. While he can be bland at times, Worthington is actually thoughtful here and is the one good element among this wishy-washy mess. ‘The Shack’ is the kind of guff that might go down well in Bible-Belt America, but the rest of us should avoid it like a plague of locusts.
RATING: 1 / 5
Review by Gareth O’Connor
Review by Gareth O'Connor
1
Wishy-washy