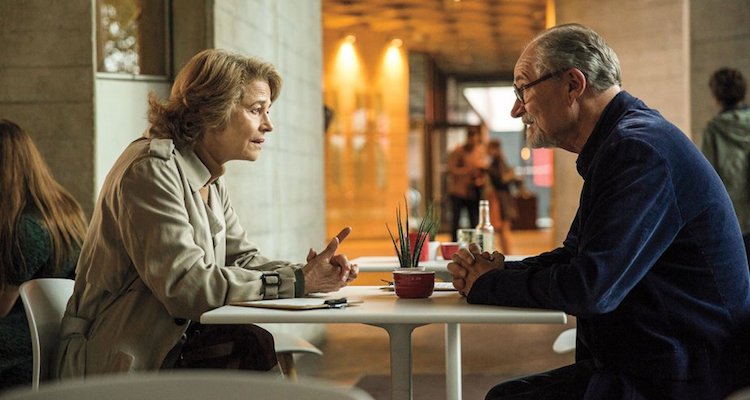 The Sense of an Ending

THE SENSE OF AN ENDING (UK/15A/108mins)
Directed by Ritesh Batra. Starring Jim Broadbent, Charlotte Rampling, Harriet Walter, Michelle Dockery, Matthew Goode.
THE PLOT: Retired Tony Webster (Jim Broadbent) runs a Leica camera store, has a cordial relationship with his ex-wife, and is trying to be more involved with his pregnant daughter’s life, but likes his perfectly ordered world just the way it is. When Tony receives a letter saying an ex-girlfriend’s mother left him something in her will, Tony’s world is rocked as he is forced to remember the actions of his past, and make sense of the present with new information.
THE VERDICT: Based on the novel of the same name by Julian Barnes, and boasting an impressive cast including Jim Broadbent, Michelle Dockery, Harriet Walter and Charlotte Rampling, ‘The Sense of an Ending’ could be an engaging mystery filled with nostalgia and regret for the decisions made in the past. As it stands however, ‘The Sense of an Ending’ lives up to its title, and is drawn out, slow, and never really gives the audience more than a sense of what is going on.
Jim Broadbent leads the cast as the affable but slightly curmudgeonly Tony, and does well in making the character likeable, although the obsession with which he chases down the item he has been left in the will seems a little out of character at first, but becomes clearer as the film goes on. Harriet Walter makes Tony’s ex-wife Margaret a charming character, and the relationship between Broadbent and Walter is sweet to watch on screen. Charlotte Rampling brings a dose of coldness to the film, which is supposed to be mysterious but never quite comes off. The younger versions of the characters are played by Billy Howle and Freya Manor, with Matthew Goode and Emily Mortimer in supporting roles.
Nick Payne adapted Julian Barnes’ novel for the big screen, and while it is obvious he has enjoyed writing the characters in a way that they seem fully rounded and realised, it seems he got twisted up in the book’s mystery, and never manages to pace the film well enough that the audience cares about the resolution of the events from Tony’s past.
As director, Ritesh Batra also struggles with pacing the film in a way that makes the audience want to go on this journey of discovery with Tony. The supporting scenes seem far more interesting than the mystery at hand, with too many holes left for the audience to get a fully rounded feel for just what happened to make Tony so obsessed. That said, the performances are as strong as we might expect from such a stellar cast, but even these are not enough to carry this slow and meandering film.
In all, ‘The Sense of an Ending’ is long, drawn out and ultimately unsatisfying. Broadbent, Walter, Dockery and Rampling do well, but this is not enough for a film that never seems entirely sure what it is trying to say.
RATING: 2/5
Review by Brogen Hayes