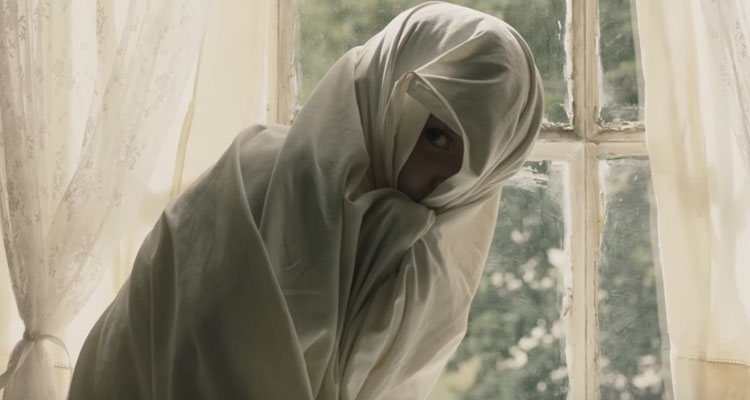 The Secret Of Marrowbone

The Plot: The four Fairbairn children and their mother have escaped from an unspoken secret in England to their new home in America. The eldest is strong-willed Jack (George MacKay), who looks after his sister Jane (Mia Goth), brother Billy (Charlie Heaton) and the youngest, Sam (Matthew Stagg). They take on the name of their new home – Marrowbone, a dilapidated mansion far from town. Their only friend is librarian Allie (Anya Taylor-Joy). When their mother dies, Jack tries desperately to keep the family together by pretending their mother is alive to local lawyer Porter (Kyle Soller). However, a deeply-buried family secret is about to come to the surface. Could it have something to do with what’s going on in the attic?

The Verdict: First, a bit of potential false advertising. The Secret Of Marrowbone is being packaged as a spooky ghost story. However, there’s a good case to be made that it’s really an intricately-plotted thriller fused, mad scientist-style, with some horror elements to make a hybrid genre film. Credit to first-time feature director Sergio G. Sanchez for trying something a little less predictable than the usual peek-a-boo multiplex horror fare. There’s a lot to admire about this film, from the concentrated acting to the production design and the moody atmospherics. However, Sanchez falls into some of the traps and clichés of the horror / thriller genres.

Sanchez is unsurprisingly a disciple of J.A. Bayona, writing that director’s nerve-rattling Spanish film The Orphanage. Striking out on his own this time (with Bayona executive producing), the writer/director has concocted a film about a family of four children who run from their past but can’t hide from it (similar in some respects to the recent The Lodgers). Much is left unsaid early on, with Sanchez suggesting rather than showing. It’s a subtle touch which is then ramped up as the third act kicks in and all hell breaks loose in the house. Sanchez makes good use of his gloomy domestic environment, from figures in the near distance to clever sound design and one well-placed shock (which prompted a gasp from an audience member, which can be considered a good omen). He also finds ways to make that old horror staple, the cracked mirror, an object of physical fear.

Just when it looks like Sanchez is steering the film into original waters, he instead changes course into cliched territory. He trots out some well-worn genre tropes, which would enter spoiler territory if mentioned. It’s enough to suggest that not all is as it seems. It’s as if Sanchez didn’t have the conviction to see his otherwise engaging story through in a more natural manner. Instead, he settled for a scared child’s comfort blanket and an ending that pushes at the barrier of credibility. It’s a slight disappointment, but thankfully not enough to imbalance what came before. There are enough atmospherics here to jolt the slow-burning story into life, unravelling like a spider’s web. The Secret Of Marrowbone is flawed, but never less than interesting.