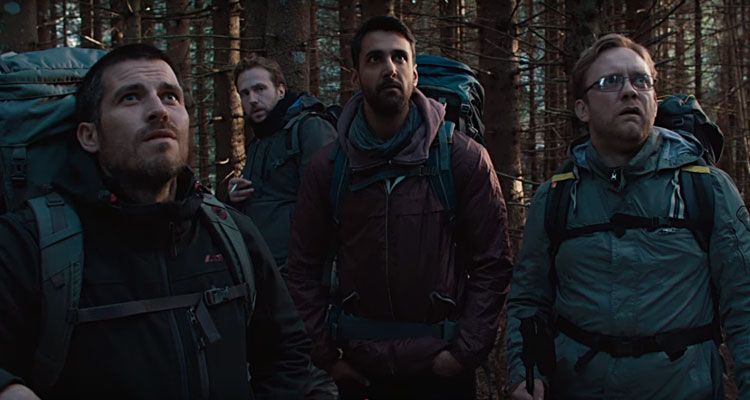 THE RITUAL (UK/16/94 mins)
Directed by David Bruckner. Starring Rafe Spall, Robert James-Collier, Arsher Ali, Sam Troughton.
THE PLOT: Luke (Rafe Spall) is wracked with guilt after not intervening when his friend is killed by thugs in a shop. Six months later, the wounds haven’t quite healed yet. To the put the past behind him, Luke is going on a male-bonding hiking trip to the remote Swedish mountain forests with college pals Phil (Arsher Ali), Dom (Sam Troughton) and Hutch (Robert James-Collier). After paying their respects to their fallen colleague, they find themselves in dense forests where a mutilated bear is hung up in the trees like a sacrifice. Something is not right here. Seeking refuge from the weather, they stay in an abandoned house which has a pagan-like symbol upstairs. Nightmares ensue, time disappears and they realise that something in the forest is stalking them. An ancient evil that won’t let them go…
THE VERDICT: ‘The Ritual’ is a British lost-in-the-wild horror in the bloody vein of ‘Dog Soldiers’, ‘The Descent’ and more recently, ‘The Hallow’. At its most basic level, it’s a creature feature which conforms to the standard trappings of the genre: likeable characters going through a rough time in their lives; a confined environment where danger lurks in every corner and shadow; and a sinister force which is threatening their very lives. It feels familiar but director David Bruckner finds ways to keep the story moderately inventive, suggesting rather than showing the ancient evil that is hunting these men.
The script is co-adapted by Adam Nevill from his novel, along with Joe Barton. It takes a while to get going at first, with some shakiness in the characterisation. As the plot settles and the terror begins, the friendship between these four men becomes more prominent. Bruckner shifts gears here and introduces elements of the unknown – roars and crashing noises at night in the forest, followed by deep-voiced chanting. The sound design is particularly well used here, letting the audience fill in the visual blanks. It’s creepily effective at times, suggesting an otherworldliness to this Swedish environment.
Despite those initial wobbles, the film gradually gets better as it moves towards its conclusion. After building it up for so long, the creature is somewhat atypical for films of this type – but is nonetheless still unsettling. Those bright, Jawa-like eyes buried deep in the dark will put the frighteners on anyone. Bruckner suggests a backstory for the creature and why it’s there, but leaves it open to interpretation. Audiences don’t need to be spoonfed, particularly in a genre film where certain beats are expected. While it doesn’t re-invent the creature feature like ‘The Descent’, ‘The Ritual’ is still a decent enough effort that holds your attention. Being alone in a strange, foreign wood at night is enough to get those pulses racing.
Rating: 3 / 5
Review by Gareth O’Connor