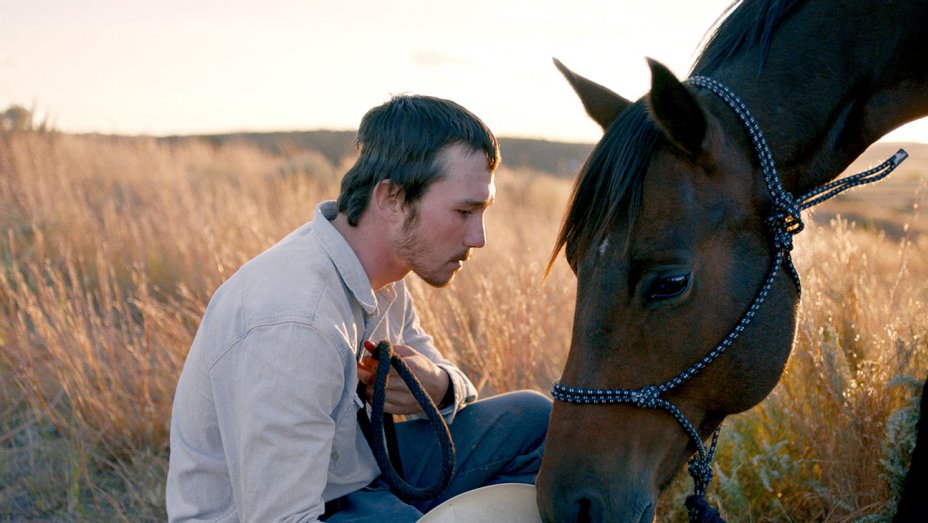 The Plot: Deep in South Dakota, cowboy and famed rodeo rider Brady (Brady Jandreau) is recovering from a serious head injury. Having been tossed from a bucking bronco, he finds himself rudderless with a damaged right hand that is slow to respond to signals from his brain. His father Tim (Tim Jandreau) thinks he should lay low for a while. However, his father squanders the family money and that puts pressure on Brady to care for his sister Lilly (Lilly Jandreau), who has learning difficulties and brother Gus (Mooney), who is physically disabled. The road to recovery will be a long one, but the mental hurdle of not riding is an even greater challenge for this hopeful young man…

The Verdict: Chloe Zhao’s eloquent second feature has scooped a number of awards at film festivals, including Cannes. It’s a sensitive and often internalised deconstruction of masculinity in the heartland of America. It takes as its subject the modern cowboy and rodeo rider, who lives to ride and has grown out of the land he lives on. He and the land are one, but this can come at a price. There are dangers with rodeo riding, as our main character Brady comes to accept. His journey to recovery will involve him riding through the pain, as one of his friends puts it. Brady’s theory is that a horse is meant to wander the prairie and a cowboy is meant to ride.

Brady’s environment is a world away from the hollow glamour of Hollywood and its do-gooder cowboys. Zhao is keen to respect the traditional image of a cowboy, but not in a Hollywood way. Instead, the film comes across more as a salute to a young man swallowing his pride and possibly accepting that being alive, being with his family means more than riding the prairie. It’s an embodiment of the American Dream, but shot through with a slight dose of realism to keep the characters in check.

That realism extends to the actors tasked with essaying these roles. Not that you would know it, but they’re actually non-actors mostly playing themselves. Whereas this was bluntly obvious in the disappointingly leaden The 15:17 To Paris earlier this year, Zhao captures an authenticity to these performances which is commendable. Brady Jandreau is a real find. Not once does he lash out with his anger at his situation, instead burying his shame and pride all in his intense, James Dean-ish eyes. Dialogue is snipped back slightly to allow Jandreau to bring his presence forward more. It’s a commanding performance, even for a non-actor.

Zhao frames her characters against the rugged beauty of a Native American reservation in South Dakota, recalling that of John Ford’s masterpiece The Searchers. There are some gorgeous magic hour shots by cinematographer Joshua James Richards, as Brady wanders off into the indifferent landscape as if hoping for an answer from some higher power. There’s everyday heroism here, but not in an obvious flag-waving manner. This startling American indie is a slow-burner, deliberately paced but is also visual cowboy poetry that gently tugs at the heartstrings. Seek it out.