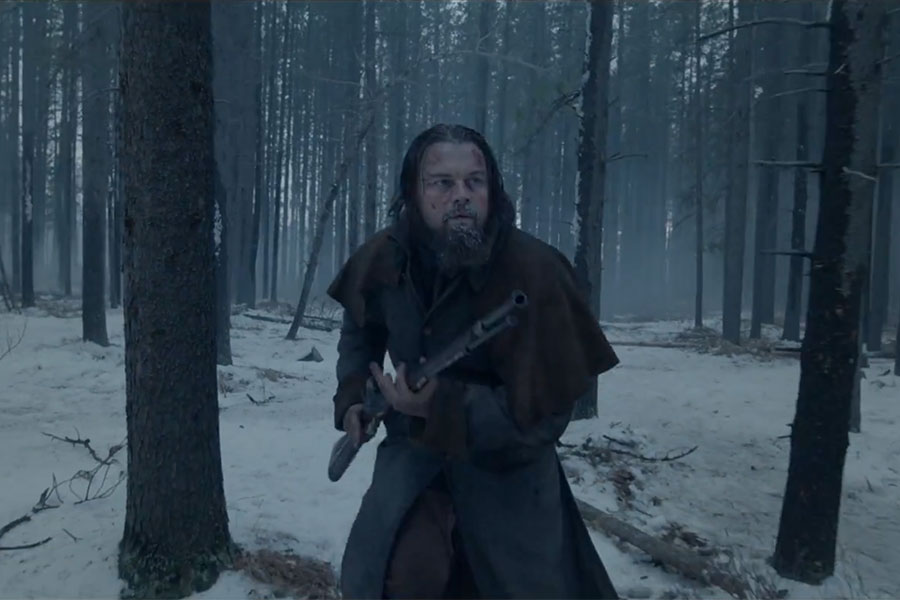 THE REVENANT (USA/16/156mins)
Directed by Alejandro González Iñárritu. Starring Leonardo DiCaprio, Tom Hardy, Will Poulter, Domhnall Gleeson, Forrest Goodluck.
THE PLOT: Fur trader Hugh Glass (Leonardo Di Caprio) is on an expedition in the 1820s when Native Americans attack him and his colleagues. After almost 40 of the company are killed, Glass, Fitzgerald (Tom Hardy), Captain Henry (Domhnall Gleeson), Bridger (Will Poulter) and Glass’s half Native American son Hawk (Forrest Goodluck) retreat to the mountains to make their way back to the camp. It is there that Glass is attacked and mauled by a bear and although Fitzgerald, Bridger and Hawk are tasked with caring for the obviously dying man, it is not long before he is left for dead and finds a way to survive alone.
THE VERDICT: Just as ‘Birdman’ was an endurance test for actors and audience alike, ‘The Revenant’ follows in director Alejandro González Iñárritu’s style as Glass spends much of the 156 minute running time fighting his way through frozen wasteland to find a way to survive, and the audience endures violent, gory and bloody scenes that are not gratuitous – they always serve a purpose – but are often hard to watch.
Over the past number of years, Leonardo DiCaprio has been knocking on the door of greatness with his roles in ‘Inception’, ‘Shutter Island’ and ‘Django Unchained’, but it is surely his performance in The Revenant that will finally earn him the shiny gold statuette of recognition that he deserves. Although DiCaprio has precious little to say throughout the film, it is his performance that anchors the story; dialogue is not needed to convey the determination and pain the character goes through, it is writ large on DiCaprio’s face. Elsewhere, Tom Hardy is a menacing presence as the cruel and ruthless Fitzgerald, Will Poulter is perhaps the best he has ever been as the naïve but loyal Bridger and Domhnall Gleeson makes up for his campy evil turn in ‘Star Wars: The Force Awakens’ with a character whose rage, determination and borderline cruelty are understood and in keeping with the feel of the film.
In terms of story, ‘The Revenant’ is incredibly simple; the extraordinary tale of a man left to die of horrific injuries in hostile territory who somehow makes it through. There is plenty of violence in the film – mostly between the Native Americans and the settlers – but none of this ever feels gratuitous, although it is on the brutal side. Instead, the violence is used to illustrate the tensions between the tribes and nationalities throughout the newly formed colony, as well as the fight for survival in a hostile climate. There also are some great touches made with Leonardo DiCaprio’s character almost having to become as animalistic as the creature that attacked him in order to survive.
As director, Alejandro González Iñárritu has coaxed – or if some on-set stories are to be believed, bullied – wonderful, engaging and heartbreaking performances from his cast. DiCaprio conveys a multitude through breaths, grunts and eye movement, Hardy’s accent is a little chewy from time to time but he always makes his character’s cruelty understood and Will Poulter’s naïve but well meaning character rounds out the central trio and brings some balance to the film. The film, like ‘Birdman’, is beautifully, fluidly and engagingly shot, with Emmanuel Lubezki’s stunning cinematography giving the film a dreamlike (or nightmare like) quality.
In all, ‘The Revenant’ is not an easy film to watch; it is brutal, gory and cruel, but the story is so engaging, so beautifully shot as to draw the audience in, and Leonardo DiCaprio ably carries the film on his injured shoulders with barely a word spoken. The final act of the film feels a little long and underlines the 156 minute running time, but The Revenant is a startling, engaging and powerful piece of work overall.
RATING: 4/5
Review by Brogen Hayes