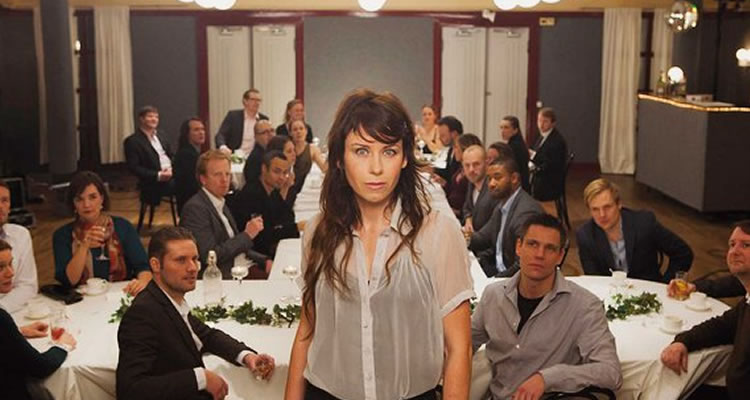 THE REUNION (Sweden/Club/88mins)
Directed by Anna Odell. Starring Anna Odell, Anders Berg, David Nordstrom, Erik Ehn, Fredrik Meyer, Sandra Andreis, Kamila Benhamza, Niklas Engdahl.
THE PLOT: At a 20-year school reunion, late arrival Anna Odell (Odell) is clearly not happy with her former classmates. Anna was bullied in school. And she wants everyone to be reminded of that fact tonight, standing up to give a speech that outlines the childhood cruelty that made her schooldays a misery. Unsurprisingly, such rain on this anniversary parade doesn’t go down to well with her former classmates, and Anna soon finds herself being ejected, rejected once more. But, hey, this is all just a staged drama organised by Anna Odell, and she soon has her real former classmates around, to watch the drama unfold, so she can guage their reactions. Some are happy to take a walk down misery lane with Anna, whilst others – usually those higher up the school food chain – refuse to engage. So, Anna tracks them down, eventually confronting the bully who most made her early years torture…
THE VERDICT: Hey, it’s Swedish, it’s a family gathering, gone horribly wrong, around the dinner table – man, that got my heart racing there. Until about 10 minutes into this self-indulgent, so-so sad-sack movie that simply reminds you just how incredible Thomas Vinterberg’s FESTEN (1998) really is.
Very much Anna Odell’s movie, the Swedish artist not only writing and directing but taking on the lead role too, THE REUNION feels more like art installation than movie. The fact that Anna Odell plays a character called Anna Odell adding to the fact.
One of those movies that you can, at a push, admire but not actually enjoy, THE REUNION makes you want to go out and punch a schoolkid. Wonder what Odell would make of that…?
RATING: 2/5
Review by Paul Byrne