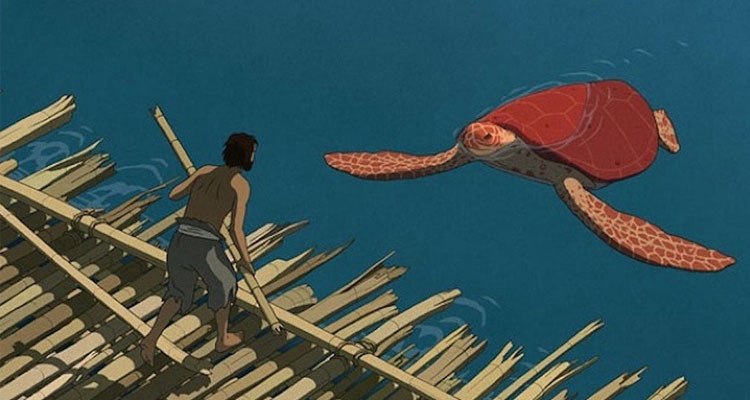 THE RED TURTLE (France/Belgium/Japan/PG/80mins)
Directed by Michael Dudok de Wit. Starring Emmanuel Garijo, Tom Hudson, Baptiste Goy, Axel Devillers, Barbara Beretta
THE PLOT: Shipwrecked on a tropical island, an unnamed man manages to source fruit and water to survive, and is soon building a raft. Setting sail, a mysterious attack from below batters the raft asunder, and the man is forced to swim back to shore. Only to repeat the entire process again. And again. Eventually, the source of the attacks, a large red turtle, is spotted by the man, and when he happens upon the turtle on the island’s beach, he decides to take revenge…
THE VERDICT: Although ‘The Red Turtle’ is from the mighty Studio Ghibli, it plays far more like a European animated offering, in the vein of ‘The Man Who Planted Trees’ or even Biggs line-drawn beauties.
Actually the work of Dutch-born filmmaker Michael Dudok de Wit, who studied animation in England before serving time with London’s Richard Purdum Productions in the 1980s and then the Folimage studio in France. It was here that he produced the 1994 short ‘The Monk And The Fish’ (about a friar’s desperate pursuit of a fish through abstract landscapes), before moving to England and producing the Oscar-winning 2000 short ‘Father And Daughter’ (about a woman’s lifelong yearning for her absent father). The shorts caught the eye of Ghibli, a major influence on de Wit, and they got in touch. Happy for de Wit to make his film in Europe, and to have total control over the production, Ghibli were keen to stress that this didn’t have to be a Ghibli production, so to speak.
That the resulting film has its own particular style and pace is proof of that, and testament to Ghibli’s pure love of animation. Exploiting the brand has never been one of their weaknesses.
There will be some who will find de Wit’s film a little too slow and fable-esque, especially given that there’s no dialogue throughout, but, if you’re willing to let yourself go, and float down stream here with ‘The Red Turtle’.
RATING: 4/5
Review by Paul Byrne