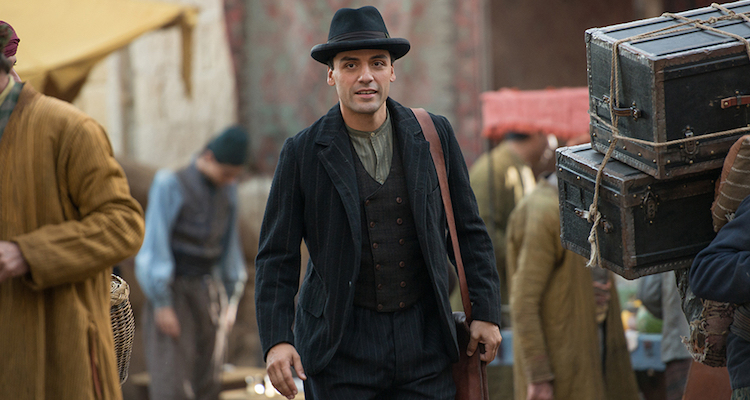 THE PROMISE (Spain | USA/12A/133mins)
Directed by Terry George. Starring Oscar Isaac, Charlotte LeBon, Christian Bale
THE PLOT: Against the backdrop of World War I, Armenian medical student Michael (Oscar Isaac) travels to Constantinople to continue his studies, leaving his family and fiancée – whose dowry he is using to pay for his education – back home. Michael falls for the beautiful Ana (Charlotte Le Bon) in Constantinople, and as Constantinople burns from riots and turmoil, the two have an illicit affair behind Ana’s boyfriend Chris (Christian Bale) back.
THE VERDICT: ‘The Promise’ is a film that, on the surface, we have seen the like of before; love in a time of war. The interesting thing here is that director Terry George’s previous films include ‘Some Mother’s Son’, ‘In the Name of the Father’ and ‘Hotel Rwanda’; all films about troubles with identity, nationality and power, and ‘The Promise’ is really no different, as it is set against the Armenian genocide between 1915 and 1923.
Oscar Isaac leads the cast as Michael, a man who does not seem to have the courage of his convictions, and is almost always bailed out by the actions of others. Isaac makes Michael a charming enough character, but is consistently struggling against a screenplay that wants to paint him as anything but a hero. There is little doubt that Charlotte Le Bon is beautiful, but she gets very little chance to flesh out the character of Ana, and give the audience an understanding of just why men fall at her feet. Christian Bales makes Chris brash and loudly American, and a man who is desperate for the world at large to know what is happening as the Ottoman Empire crumbles, while drinking himself to death and being generally obnoxious. The rest of the cast features Shohreh Aghdashloo, Tom Hollander, James Cromwell and Jean Reno who, like the rest of the cast, struggle through the film in a variety of accents, and Angela Sarafyan who, unlike the rest of the main cast, actually is of Armenian descent.
Terry George and Robin Swicord’s screenplay struggles with trying to be all things to all men, and ends up being not much to any. There is a love triangle, a war machine, a coward and a woman waiting at home, as well as a glimpse at a concentration camp, and hints of racism throughout the film. The true subject of the film – the genocide of Armenian people – does not even enter proceedings until over an hour in, and the love story that it replaces is insipid and unengaging.
As director Terry George allows ‘The Promise’ to be rambling and loosely structured, where the story needs a firm hand to guide it through and keep the audience engaged with the characters, who are not particularly well drawn. The pacing is ponderous throughout the film, and other than some casual “you are not like us”-esque statements from Turkish characters, the film never tries to explain the reason for the Armenian genocide, other than the dissolution of the Ottoman Empire, which is mentioned in passing. Terry George is known for exploring national identity under fire, but struggles to get his point across in ‘The Promise’.
In all, ‘The Promise’ does not work fully on any level; as a love story, an examination of war or shining a spotlight on genocide, and although the film is populated with wonderful actors, the entire film is lacklustre and unengaging.
RATING: 2/5
Review by Brogen Hayes