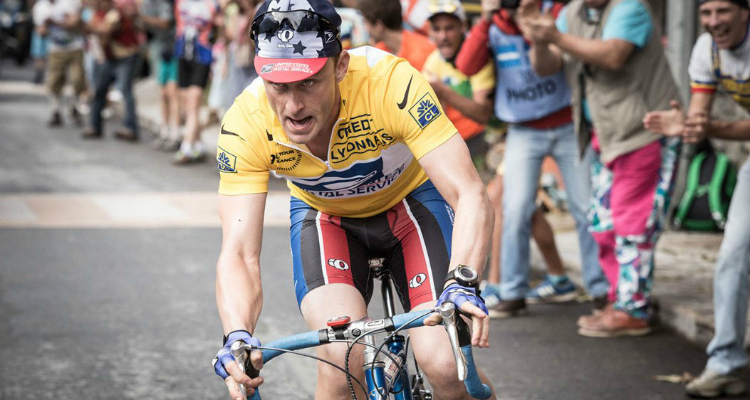 THE PROGRAM (UK | France/15A/103mins)
Directed by Stephen Frears. Starring Ben Foster, Chris O’Dowd, Jesse Plemons, Dustin Hoffman, Lee Pace, Elaine Cassidy, Laura Donnelly
THE PLOT: Lance Armstrong was once one of the most famous and decorated athletes in the world, with seven Tour De France victories under his belt. All of this came crashing down in 2013, when he finally admitted to the doping allegations that had plagued him for years. Director Stephen Frears takes us behind the scenes of the man, the myth and the cheat.
THE VERDICT: Just over 18 months have passed since Alex Gibney’s documentary about the incredible life and lies of Lance Armstrong – ‘The Armstrong Lie’ – was released, and although he seems to be well able to laugh at himself – he tweeted an image of the Cards Against Humanity ‘Lance Armstrong’s Missing Testicle’ card in 2014 – he has largely faded form public consciousness. We have moved on to the next big thing. Kim Kardashian is pregnant again, donchano!? Why Stephen Frears’ film is necessary is unclear, but it is a clever and well-constructed piece of cinema nonetheless.
Ben Foster does a remarkable job as the manipulative, ambitious and ultimately dangerous Lance Armstrong. Not only does he look remarkably like the real man, he has got his mannerisms down pat, and makes Armstrong charming, with a layer of danger underneath the surface. Chris O’Dowd obviously has fun playing the tenacious and suspicious David Walsh and Jesse Plemons brings some sympathy to the film as Floyd Landis, a cyclist who was swept up in Armstrong’s wake. The rest of the cast includes Lee Pace, Elaine Cassidy, Laura Donnelly and Dustin Hoffman in a small role.
John Hodge’s screenplay is based on David Walsh’s book ‘The Race to Truth: Blowing the whistle on Lance Armstrong and cycling’s doping culture’, but although there is more focus given to Walsh’s investigation of Armstrong than there has perhaps been in other films, there is really nothing in The Program that we didn’t already know. The science is made accessible and Armstrong is shown to be as menacing as he was rumoured to be but those who have followed Armstrong’s case will not learn any new information.
As director, Stephen Frears has created an intriguing film with a rock and roll soundtrack, underlining Armstrong’s image as a rock and roll cyclist at the height of his fame. However, songs such as ‘Everybody Knows’ by Leonard Cohen, and Radiohead’s ‘No Surprises’ sum up the central problem with the film; it is well acted, well put together and cleverly uses archive footage of Armstrong himself, but we already know this story.
In all, ‘The Program’ is really nothing new. It is well acted – Foster in particular is excellent – well put together and an almost terrifying example of how a manipulative and ambitious man can make it to the top, but with the Oprah interview only three years ago, and The Armstrong Lie barely in our rearview mirror, it could be said that perhaps Frears should have allowed some time to lapse, so audiences don’t suffer Armstrong fatigue… The way we did with the constant back and forth of allegations and denials.
RATING: 3.5/5
Review by Brogen Hayes

Review by Brogen Hayes
3.5
Nothing new