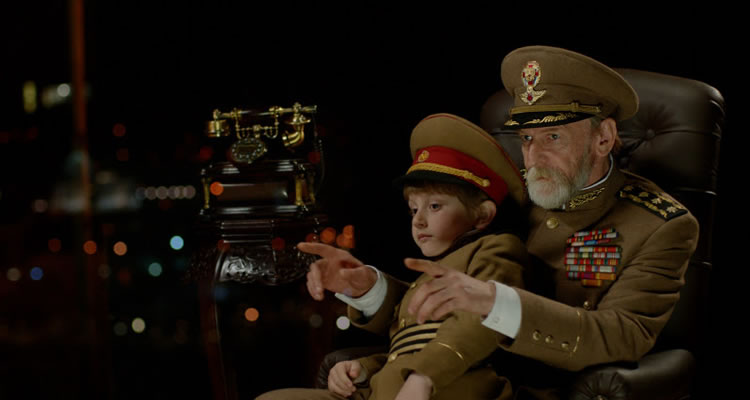 THE PRESIDENT (UK | France | Germany | Georgia/IFI/105mins)
Directed by Mohsen Makhmalbaf.
THE PLOT: In an unknown country, a despot President – who insists on being referred to as Royalty – plays with his young grandson and showing off his power by turning the lights of the city off and on at his whim. As he does so, revolution breaks out in the country, leaving the President stripped of his power, his home and his family, and having to disguise himself as one of those he oppressed, in order to survive.
THE VERDICT: Inspired by recent uprisings in the Arab world, director Mohsen Makhmalbaf attempts to make an allegorical film about the power to corrupt, and the idea that those who topple the despots from power can often be tainted by the power they wield.
The film focuses on the President and his young grandson as they quickly go from being the most powerful people in this unnamed country, to two of the most abhorred and wanted. Writers Mohsen Makhmalbaf and Marziyeh Meshkiny attempt to show how quickly dictatorships can come to an end, and while they succeed at this, they never really decide where audience sympathy should lie. It is difficult for the audience to empathise with a fallen dictator and his bratty, spoiled grandson. The same goes, however, for the people they encounter on their journey to the border; the oppressed have risen up with a vengeance and are quickly proving themselves as liable to be corrupted as those they have replaced.
Tonally, THE PRESIDENT is pretty much a mess; it tries to be light and engaging, but is too heavy to be a comedy and never plumbs the depths enough to be a true drama. There are times when the film is let down by lingering shots that should have been trimmed during the editing process, and overall the pacing is drawn out and slow, meaning the film drags its heels from one episodic scene to the next.
As director, Mohsen Makhmalbaf coaxes a surprisingly wonderful performance from the young boy playing the President’s grandson, but he is often too bratty for the audience to sympathise with him. Elsewhere, the rest of the cast never truly embrace their characters or are given a chance to make them anything but one dimensional, and although there are lessons to be learned here, they are hammered home too heavily and too slowly for the film to succeed.
In all, THE PRESIDENT tries to make a statement about the corrupting influence of power, and while there are a couple of interesting moments, the film is too long, drawn out, badly edited and poorly paced for it to work.
RATING: 2/5
Review by Brogen Hayes

Review by Brogen Hayes
2
Drawn Out