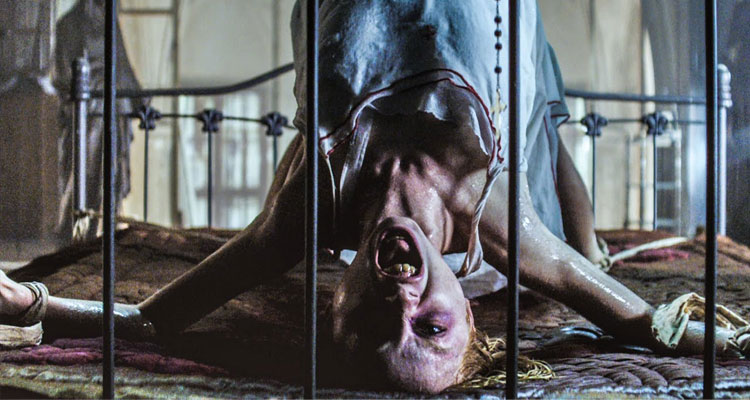 The Possession Of Hannah Grace

The Plot: During a violent exorcism, Grainger (Louis Herthum) mercy kills his possessed daughter Hannah (Kirby Johnson). Fast forward three months later and Megan (Shay Mitchell) takes a new job at a hospital morgue in Boston. Having quit the police due to her partner being shot, Megan took to the bottle. However, her friend and AA sponsor Lisa (Stana Katic) believes that a fresh start is good for her. Good idea, bad choice of job. While Megan is committed to proving herself, the graveyard shift is not exactly welcoming. Particularly when the mutilated and partially burned corpse of Hannah is delivered into her hands one night. The corpse refuses to be photographed and doesn’t appear fully dead. Then it starts to heal itself…

The Verdict: The Possession Of Hannah Grace. A generic-sounding horror, the kind that in older days might have ended up in the video store bargain bin for a fiver. It’s not all that surprising to learn that it comes from Sony’s Screen Gems, a company that produces low-budget genre efforts that vary wildly in quality. However, dig a little bit deeper and it turns out to be an effective film. It certainly earns its cinema release, rather than being unceremoniously dumped on Netflix (which seems to be the way its going for unwanted studio films these days). The title does the film a slight disservice though, as original title Cadaver is a more accurate description. This isn’t a film about an exorcism. This is about the aftermath, when the corpse retains something evil inside.

In that respect, it comes across as a companion piece to the recent The Autopsy Of Jane Doe. That film played with the characters and the audience as to whether the corpse was really dead, often to comic effect. The Possession Of Hannah Grace goes down the pure terror route and boils the plot down to a single character piece. Mitchell anchors the film, the only living character (maybe) in the limited space of the morgue environment. There’s a troubled backstory for her character, which suggests that she might be seeing things. Eschewing predictable scream queen antics, Mitchell gives a credible performance throughout. Credit also to Johnson for her highly physical performance as the corpse, bending her body into unnatural poses as she ventures off the slab and into dimly-lit hallways to unsettling effect.

Dutch-born director Diederik Van Rooijen pumps up the atmospherics to good effect, keeping them in line with the film’s sombre style rather than a horror-horror scenario where there has to be a jump scare every two minutes. It’s a mood piece, with a mostly firm sense of its limited environment of cadavers, surgical tools and medical equipment. There’s also excellent use of bone-crunching sound design. It is however less effective when it leaves the immediate confines of the morgue. A rooftop fright sequence is mis-judged, as it appears to violate the film’s own geography. It dissipates the tension by locating the fear out in the open, something which a good horror director should know not to do.

While it’s not remarkable by any means, The Possession Of Hannah Grace has its moments and efficiently ratchets up tension to chilling effect. It also thankfully avoids clichés about morgue attendants being cheerful people who munch on sandwiches and are unfazed about working around corpses – whether dead or not quite dead. It’s a creepy little shocker that wraps up a good year for horror films.