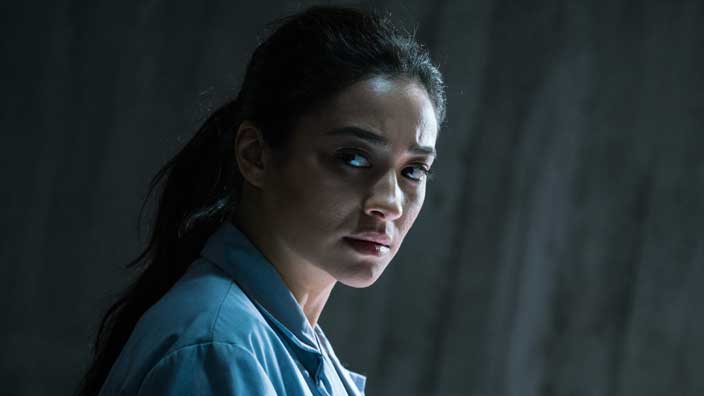 The Possesession Of Hannah Grace – Interview with Shay Mitchell

A shocking exorcism spirals out of control, claiming the life of a young woman. Months later, Megan Reed (Shay Mitchell) is working the graveyard shift in the morgue when she takes delivery of a disfigured cadaver. Locked alone inside the basement corridors, Megan begins to experience horrifying visions and starts to suspect that the body may be possessed by a ruthless demonic force.

We caught up with actress Shay Mitchell to talk about the new horror movie hitting Irish cinemas this week.

What drew you do the character of Megan?

“I was really drawn in by her layers, and by her strength and courage.  When I finished the script, I really enjoyed the ending. I can’t say much about that without spoiling it but what I can say is that I love the strength she displays as the movie goes along, and how she doesn’t let her issues stop her. For the most part in the past, women in horror had to be saved by a man. The man swoops in but here we have a woman fighting to save herself. I really loved that about this movie.”

Do you think that this shift in the horror genre, where we see a woman protecting herself, is part of the greater shift we are seeing coming out of Hollywood?

“I am seeing it a little more? Yes, I am. Do I hope that it continues and it gets to the point where it isn’t even a question anymore? Absolutely. I am glad to be part of this film where we see it happen? Definitely.

In movies, we don’t usually see the consequences of police officers who are involved in traumatic incidents. They see their partner shot, shrug and move on but here we really see the impact and the PTSD suffered by your character. Did you spend time with real-life officers to get into that headspace?

“I was fortunate enough to do a ride along and to talk in-depth with some of the female officers on the Boston police force.  I went to some AA meetings as well to talk to people who suffer from various addictions, and I had lengthy conversations with people who have PTSD. I went into this film feeling like I had a really good idea about my character’s mindset.”

It is a physically demanding role; did you have to do a lot to get in shape for it?

To be honest, no. I shot this straight after I finished Pretty Little Liars which I was on for seven seasons.  I trained consistently throughout that time. I’ve always been into training for me and I have boxed for the last five years so I felt strong enough coming into this role. Thank goodness! This was really intense but that is something I enjoy. I enjoy doing all my own stunts. It was a lot of fun to be able to do all of my own stunts in this movie. I was really proud of the work I put in.

Are you a fan of the horror genre?

Not really, my mind already runs so wild that I don’t think I need to fill it with things from scary films and tv shows. At the same time, I see this film as having more to it than just the scares. There is the underlying message.  There is also a good story. I wouldn’t say horror is one of my favourite genres but I love the shared experience that comes with the genre. When you watch a scary movie with other cinema goers and everyone is jumping at the same time you feel that shared energy of everyone being on the edge of their seats. I enjoy that feeling.”

Hannah Grace’s corpse was so gory, did you get used to working with it?

I never got used to it. Kirby Johnson who plays Hannah is such an amazing dancer and a really nice person. She is really sweet. I definitely never got used to her with all that makeup on. I was always creeped out by her.

I read that Kirby is a contortionist and did most of her own stunts, that must have made a change to the usual CGI?

She is amazing. She did all of her own stunts and contortions except for one creepy ceiling crawl. Everything else was her.  It was so incredible for me to be able to work off what I was seeing with my eyes. We used hardly any special effects because she was able to do it all herself.

You are really into researching before you do a role, and you said you don’t like things too creepy but I read that you spent some time in a morgue. Why did you put yourself through that?

I wanted to experience the eeriness of it, and I wanted to talk to morticians about how they felt about the work but to them it’s just a job. Being in a real morgue for an ordinary person is such a horrible thought but I had to check it out!

You spent seven years on a tv show, was it a big change going into a movie?

It is different. On a film set, you get more takes. You get more opportunity to try different things. And, for me, I was used to working in an ensemble but apart from that, I didn’t feel a huge difference.

You have quite a few scenes in the movie where it is just you on the screen which is a big departure from Pretty Little Liars. What was it like, not having anyone to play off?

It was really interesting being alone. Megan is dealing with so much anxiety and doesn’t really have anyone to share it with it. I started to feel really anxious. I had never experienced anxiety before but this really made me feel it. I would go home from set to my hotel and I felt really crazy, really upset. When I watched the movie, I didn’t always recognise myself, and I think that’s because I was a different person for so much of the filming. It was surreal to take on Megan’s problems to such an extent.

Without saying too much it was great to see a character dealing with anxiety but also be able to pull on inner strength.

I was really what I hoped people would take away from the film. I put a lot into the movie so hopefully, people will see that. I also have to say that I am so jealous that I am talking to someone from Ireland because it is one of my favourite places in the entire world. My dad and grandad are Irish so I went over on holidays and I had an incredible time. I can’t wait to come back.