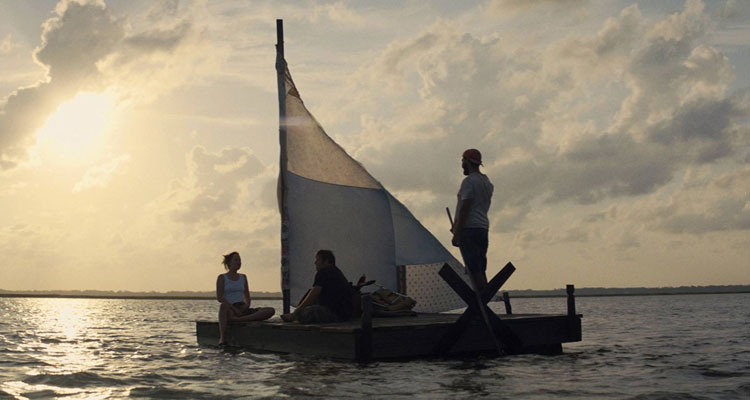 The Plot: Zak (Zak Gottsagen) is a young man who lives in a retirement home. He’s been put there by the state because he has Down Syndrome and isn’t capable of independent living. He yearns for freedom though and frequently makes escape attempts, but is caught. With the help of old timer Carl (Bruce Dern) Zak properly escapes one night to seek out his hero, a wrestler known as the Salt Water Redneck (Thomas Haden Church). Zak stows away on the boat of fisherman Tyler (Shia LaBeouf), who is on the run from trouble involving other fishermen. The two outcasts bond in the wild and form a firm friendship. Meanwhile, Zak’s carer Eleanor (Dakota Johnson) is concerned and sets out to bring him back…

The Verdict: The Peanut Butter Falcon won the narrative spotlight audience award at the SXSW Festival in Austin earlier this year. As becomes apparent as the story unfolds, it’s not hard to see why. This is a pure crowd-pleaser, sweet in its intentions but not manipulative in its motives. The sole purpose of the film appears to be a Mark Twain-like, meandering (in a good sense) story of an unlikely friendship forged between a trio of very different people at different junctures in their lives. No wonder Twain is referenced in the film, this being a southern-fried tale of friendship which unfolds at a leisurely pace. There are hints of personal troubles in the background, but nothing too significant to disrupt the delicate balance of decent, everyday characters finding each other and bonding on the river.

There’s a refreshing lack of cynicism about this lovely film, which swaps it for sensitivity and southern American charm – which it has by the bucketloads. That might have to do with this being a feature debut from co-directors Tyler Nilson and Michael Schwartz, who also wrote the keenly-observed script. The difficulty in making small, character-driven films like this in the industry cannot be under-stated. There are no car chases or explosions and nothing much happens, story-wise. It’s the journey, not the destination that counts. The trio of Zak, Tyler and Eleanor change over the course of the film, but in subtle character arcs that show surprising maturity and careful consideration from first-time feature filmmakers. They stood by their guns too, quickly batting away a bittersweet ending suggested by studio executives. The executives obviously weren’t paying attention. This is not that kind of film.

When he’s not wearing a paper bag over his head, curating European art installations or shouting at us to ‘just do it!’, Shia LaBeouf is a damn fine actor. Shunning Hollywood in recent years, he’s pursuing the same alternative career path of Kristen Stewart and Robert Pattinson in choosing smaller, character-driven projects with notable directors (e.g. American Honey with Andrea Arnold). He’s easily the best thing about The Peanut Butter Falcon, grounding his character’s essential humanity and respect for his new-found friend. Tyler is a man who is running from his troubles, but is willing to reach out a helping hand to others when needed (think of Matthew McConaughey’s performance in Mud). The innocent if somewhat mischievious Zak Gottsagen makes for an amusing counterpoint to LaBeouf. Dakota Johnson and Thomas Haden Church (as an over-the-hill WWE-style wrestler) round out the cast in fine form.

The Peanut Butter Falcon, a reference to Zak’s made-up-wrestler name, has no pretentions about itself. It’s a simple, unassuming film, which tugs at the heart-strings while poking at your funny bones. It has a laid-back and easygoing southern charm which is true to the characters and environment of the story. As debut films go, it shows great promise for its co-directors/co-writers and comfortably worms its way into your heart.