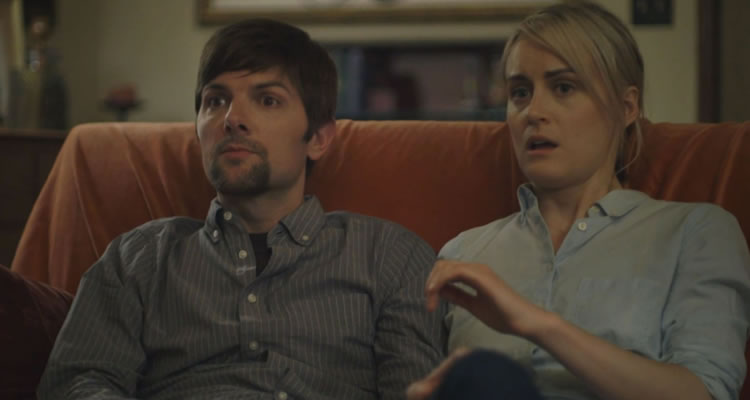 THE OVERNIGHT (USA/16/79mins)
Directed by Patrick Brice. Starring Taylor Schilling, Adam Scott, Jason Schwartzman, Judith Godrèche.
THE PLOT: Two weeks after they move to LA, and still friendless, Emily (Taylor Schilling) and Alex (Adam Scott) encounter Kurt (Jason Schwartzman) and his son Max (Max Moritt) at the park. Kurt invites the couple over to meet his wife Charlotte (Judith Godrèche) and have dinner with them. Excited at the potential of making new friends, Alex and Emily accept, without realising that their new pals have a little more than food on the menu.
THE VERDICT: Fresh from TV successes, Taylor Schilling and Adam Scott play similar characters to those we have seen the play before; as Emily, Schilling is nervous and cautious, while Scott is slightly awkward but warm and trusting. Jason Schwartzman plays Kurt as pretentious and full of hot air, but manages to make Kurt more endearing and interested in people than Philip in his last outing Listen Up Philip. Judith Godrèche is as pretentious as Schwartzman to an extent, but still manages to make Charlotte engaging, despite all her flaws and shortcomings.
Patrick Brice’s screenplay feels as though it has borrowed from Roman Polanski’s CARNAGE, and last year’s CHEAP THRILLS; keeping the characters confined in a rambling house until the truth is finally revealed. There are some lazy devices used throughout the film – there are two montages before the film is even 35 minutes in – but the uncomfortable feeling is allowed to build throughout. There are times when it is unclear whether the tone of the film is supposed to be comedic or awkward, but this is resolved in the final moments of the film with a laugh out loud cringey moment.
As director, Patrick Brice treads the line between comedy, mystery and awkwardness rather well. There are times when the film feels predictable and glaringly obvious, but then through careful twists, the audience find themselves in new territory once more. The concept and execution of the film are stretched rather thin though, leaving THE OVERNIGHT feeling drawn out, even in its 75 minute running time.
In all, THE OVERNIGHT tries to be a clever sex comedy, and almost succeeds. The cast are great in their roles, although they feel rather familiar, but there are times when the concept and execution of the film feel as though they are stretched to the limit.
RATING: 3/5
Review by Brogen Hayes