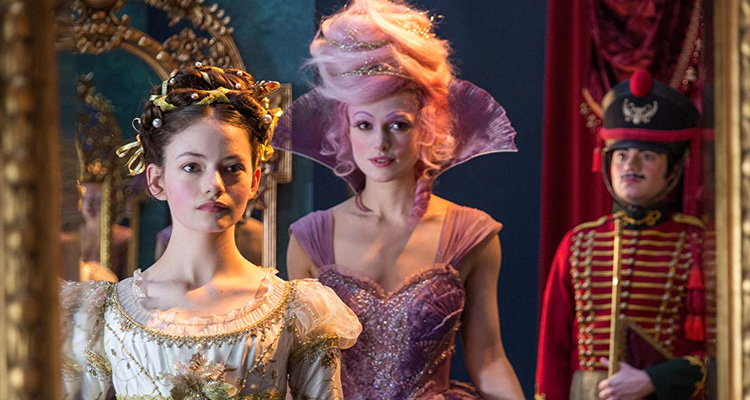 The Nutcracker & The Four Realms

The Plot: It’s Christmas Eve and Clara (Mackenzie Foy) is missing her late mother. Not wanting to celebrate with her family, she becomes obsessed with the present that her mother left her. A bejewelled egg that has a keyhole – but no key. Later on at a fancy ball, she follows a thread that leads her into a magical kingdom that was once ruled over by her mother. The kingdom is composed of four realms – Land of Flowers, Land of Snowflakes, Land of Sweets… and a fourth realm that is feared due to the presence of Mother Ginger (Helen Mirren) and a mass of mice. Land of Sweets representative Sugar Plum (Keira Knightley) wants to amass an army to fight Mother Ginger and save the other three realms. However, the key to starting it all up is the one that Clara is also seeking…

The Verdict: Bah, humbug! It’s arrived at least a month early, but Disney have foisted a Christmas treat on us already in the shiny, neatly-wrapped form of The Nutcracker And The Four Realms. Based on the 1816 story and later the Tchaikovsky ballet, it’s a sweet-natured confection full of Disney trademarks like a feisty heroine, cutesy sidekicks and some double-crossing villainous deeds. That’s not to say that it’s an unpleasant or unwelcome experience of course. Quite the opposite actually, as it sweeps the viewer away with its heroine into a fantasy world full of loyal nutcracker soldiers, giant marionettes and a mouse army to be reckoned with.

It’s a visual treat to begin with – literal eye candy. It’s handsomely mounted with some imaginative production design by Guy Hendrix Dyas, which invites the viewer to soak in the snowbound detail of these realms. The look of the film is a distraction from the soufflé lightness of the plot, which is essentially based around the search for a key and an impending war. None of which really adds up to much in the end, but it does provide a basic plot drive to get Clara from A to B and back to A again. Though, Clara’s story arc allows for some emotional connection to her late mother which is welcome.

Co-directors Lasse Hallstrom and Joe Johnston have form with Disney and they competently steer the film through some of its rougher patches, most notably Knightley’s helium-voiced Sugar Plum. Apart from purring a contemporary ‘hello boys’ to her uniformed tin soldiers, Sugar Plum generally grates on the nerves. It’s partly down to Knightley overplaying the character to the point of irritation, plucking some candyfloss from her hair at one point (eh?). The rest comes from Hallstrom and Johnston not knowing quite what to do with the character, particularly later in the film. It’s something of a Sugar Plum rush. Too much of her and not enough of the other realms, with Richard E. Grant’s Land of Snowflakes representative scarcely used.

The real winners here are the production design department and Foy, who makes for a likeable and commanding heroine. She more than holds her own against seasoned pros like Helen Mirren and Morgan Freeman. In a sense, they are compensating for the film’s wobbly moments. However, this particular Nutcracker adventure manages to stay upright and comes to vivid life before your eyes. It should delight children and adults alike, at least until Disney’s real Christmas treat when Mary Poppins Returns.