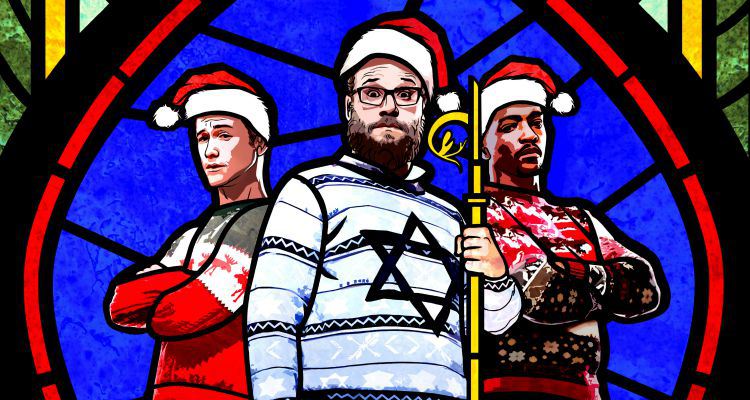 THE NIGHT BEFORE (USA/16/101mins)
Directed by Jonathan Levine. Starring Seth Rogen, Joseph Gordon-Levitt, Anthony Mackie, Mindy Kaling, Lizzy Caplan, Miley Cyrus, Michael Shannon, Jillian Bell, Ilana Glazer.
THE PLOT: In 2001, Ethan’s (Joseph Gordon-Levitt) parents were killed by a drunk driver at Christmas. Ever since, his friends Isaac (Seth Rogen) and Chris (Anthony Mackie) have made a tradition of keeping their friend company, becoming his new family. This year is different, however. Isaac is about to become a dad and Chris’s football career means he’s too famous to hang out with his friends, so the three decide to make their last Christmas Eve together one to remember.
THE VERDICT: Another year, another Seth Rogen-led bromantic comedy. The Night Before takes advantage of the festive season by planting itself right at the heart of it, but the good news is that while the film is chaotic and rather madcap, it is also wonderfully funny and at times, rather smart.
Seth Rogen plays another Seth Rogen-esque character in Isaac, but since Rogen is good at playing drug addled in an entertaining way, this works out in his favour. Joseph Gordon-Levitt obviously has a whale of a time playing Ethan and Anthony Mackie rounds out this bromantic trio as the football player who is not telling his friends the whole truth. Elsewhere, Mindy Kaling turns up as a rapid talking party girl, Lizzy Caplan plays Ethan’s ex-girlfriend and they are joined by Miley Cyrus, Jillian Bell, Ilana Glazer, Dave Franco as himself – again – and Michael Shannon in a wonderfully funny turn as the drug dealer Mr Green (geddit!?).
The story, written for the screen by Jonathan Levine, Kyle Hunter, Ariel Shaffir and Evan Goldberg follows the usual story of a wild night out gone even wilder, but has some clever touches thrown in; Michael Shannon’s character effectively works as Dickens’ ghosts of Christmas past, present and future, showing each of the men what they need to know, and there are plenty of references to great movies of the past, including Home Alone and Dogma. As well as this, the film is filled with nostalgia, and jokes are set up way in advance with great pay off, even as it is so scattered as to be messy and rather chaotic.
Director Jonathan Levine paces the film well, with each element worked out so as not to take up too much time, and to build up nicely to the mythical party the men have been trying to find for years. The trouble is that the film tries to fit in so much, that the pacing becomes rather manic and, although nothing is allowed to linger for too long, this is precisely where the film runs into trouble. That said, there are plenty of laughs and sight gags throughout the film, and the celebrity cameos are never all that gratuitous, with each poking fun at themselves in a way.
In all, The Night Before is not quite a return to the high of This Is The End, but it is an improvement on several of the recent stoner bromantic comedies from Seth Rogen. There is almost too much going on at times, but the central trio work well on screen, the jokes are there and the nostalgia present throughout. A little less chaos would have worked well, but as it stands The Night Before is a lot of fun; just don’t think about it too much.
RATING: 4/5
Review by Brogen Hayes