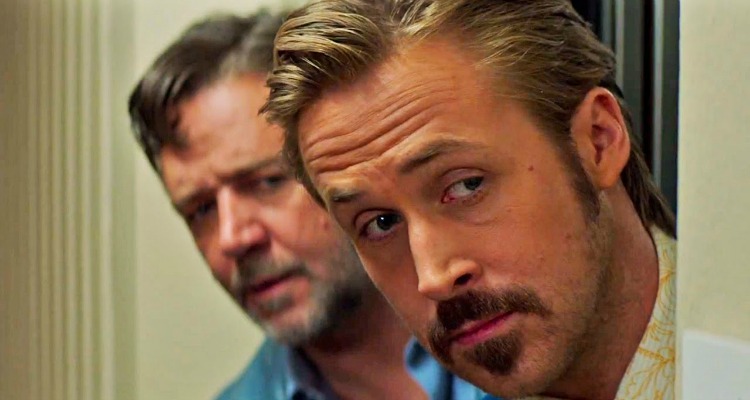 THE NICE GUYS (USA/15A/116mins)
Directed by Shane Black. Starring Ryan Gosling, Russell Crowe, Angourie Rice, Kim Basinger, Matt Bomer.
THE PLOT: Unlicensed PI Holland March (Ryan Gosling) and debt collector/enforcerJackson Healy (Russell Crowe) meet for the first time when one of Jackson’s clients pays him to get Holland off her back. The two soon realise that there is a lot more to this story than they first thought, and team up to get to the bottom of the mystery.
THE VERDICT: Directed by Shane Black, but not starring Robert Downey Jr, ‘The Nice Guys’ feels as though it is a follow up to Black’s directorial debut ‘Kiss Kiss Bang Bang’, but while the story tires to be as complex, the stylishness and comedy do not work as well, and ‘The Nice Guys’ is not half as smart as it thinks it is.
Ryan Gosling is on fantastic form as Holland March, in his second cinematic outing of 2015. The role is distinctly comedic, and Gosling shows off his timing and skill for this kind of role, making Holland March ridiculous and bumbling, but also entertaining and someone with a lot of heart. It is Gosling’s relationships with his co-stars Russell Crowe and Angourie Rice that make the film work as well as it does. Russell Crowe plays the straight man to Gosling’s fool. Although Jackson Healy is as clueless and bumbling as Holland, he is sober for most of the film, which gives him a distinct advantage. Crowe makes Jackson an imposing presence on screen and he does well against the more comedic Gosling. Angourie Rice plays Holly March – Holland’s daughter – and like Chloe Grace Moretz’s character in ‘(500) Days of Summer’, is smart and older than her years and works well with the entire cast. The rest of the cast features Kim Basinger, Matt Bomer and Margaret Qualley, but this is a film carried by the central trio.
Screenwriters Shane Black and Anthony Bagarozzi have obviously tried to capture the spirit and energy of the complicated comedic mystery ‘Kiss Kiss Bang Bang’, and while they make the characters work for the most part, in trying to recreate the complex but satisfying story of the previous film, they largely fail. ‘The Nice Guys’ relies on comedy, which is fine, but the film seems to think it is a lot smarter than it actually is. Throwing in twists and turns instead of a satisfying story doesn’t work, and neither does the drawn out plot points; the audience eventually switches off.
As director, Black creates strong chemistry between his cast, and certainly plays up the comedy of the film, but it is in trying to deal with the comedy, the complicated plot and the relationships in the film that everything begins to fall apart; Black is simply trying to keep too many balls in the air; and the one that falls is audience engagement. As well as this, at 116 minutes, the film feels long and drawn out, with the story seemingly made complicated to justify the funning time, and not the other way around.
In all, ‘The Nice Guys’ is stylish and smart on the surface, and Ryan Gosling does a great job at playing up the inherent comedy of the film, while creating strong chemistry with Crowe and Rice, but with an overly complicated story and a feel that the film is not half as smart as it thinks it is, ‘The Nice Guys’ is an overly familiar and slightly disappointing.
RATING: 3/5
Review by Brogen Hayes