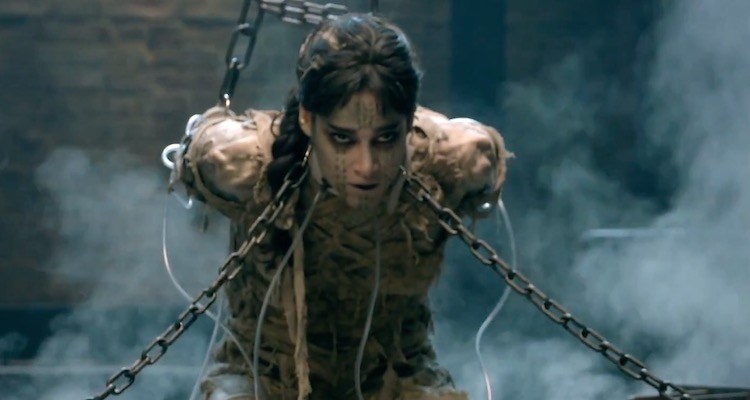 Movie Review
THE MUMMY (USA/15A/110 mins)
Directed by Alex Kurtzman. Starring Tom Cruise, Russell Crowe, Sofia Boutella, Annabelle Wallis, Jake Johnson.
THE PLOT: In ancient Egypt, Princess Ahmanet (Sofia Boutella) is angered with her father. She sets down on a path of evil, making a pact with Set, the God of Death. She’s later captured and entombed alive for eternity in Mesopotamia. Fast forward to present-day Iraq. When he’s not battling insurgents, soldier Nick (Tom Cruise) is something of a tomb raider along with buddy Chris (Jake Johnson). The discovery of Ahmanet’s ancient tomb also brings Nick’s former fling Jenny (Annabelle Wallis) into the fold. Nick accidentally releases Ahmanet’s sarcophagus. They bring it back to London, where Nick discovers that he has been chosen by Ahmanet. A fact that Dr Henry Jekyll (Russell Crowe) intends to use…
THE VERDICT: ‘Welcome to a new world of gods and monsters’ intones Dr Jekyll, channelling a much earlier cinematic mad scientist, Dr. Pretorius. Indeed. That link with the past of Universal’s revered 1930s horror franchise is brought into the present day, with the series of classic monster movies now rebranded as Dark Universe. The opening salvo is a reboot of ‘The Mumm’y. However, this is not the musty Mummy of Boris Karloff or even the more recent Brendan Fraser adventures. This is an altogether modern take, fronted by star power and a slightly darker edge (hence the tougher rating).
With a host of experienced screenwriters onboard like Christopher McQuarrie and David Koepp, this Mummy would have to be something special to justify the reboot tag. It’s not quite special, but it does show some signs of promise for this new Dark Universe. ‘Star Trek’ writer-turned-director Alex Kurtzman was obviously keen to distance himself from earlier versions. He amps up the more horrific elements, like the rotting corpses chasing our hero. There’s also some throwaway, John Landis-style scenes involving Chris, who pops up occasionally to talk to Nick about the afterlife. Think of it like ‘An Egyptian Mummy In London’ at times. The zippy action is well-paced, though the 3D adds nothing to the spectacle.
The most obvious flaw, surprisingly, is Cruise himself. He’s not the most obvious fit here for an action hero amidst Egyptian curses, cadavers and a doomsday scenario. In that sense, The Mummy is very much a Cruise vehicle left on cruise control throughout. This reviewer likes Cruise as much as the next film fan, but couldn’t help the feeling that another actor would have suited better. A slightly hammy Crowe is also miscast. However, the magnificent, versatile Boutella more than compensates. She’s by turns totally evil and humanly vulnerable, so she steals the film from her male co-stars while looking cool at it too.
As undemanding summer popcorn horror, ‘The Mummy’ is reasonably acceptable. It’s certainly entertaining, but is more like ‘The Mummy’ rollercoaster ride at Universal Studios. A more discerning horror fan like this one would have hoped for something edgier and less star-driven. This Dark Universe needs to head towards midnight, not twilight. Let’s see what Bill Condon has in store for ‘The Bride Of Frankenstein’. For now, ‘The Mummy’ should do.
RATING: 3 / 5
Review by Gareth O’Connor
Review by Gareth O'Connor
3
Popcorn horror