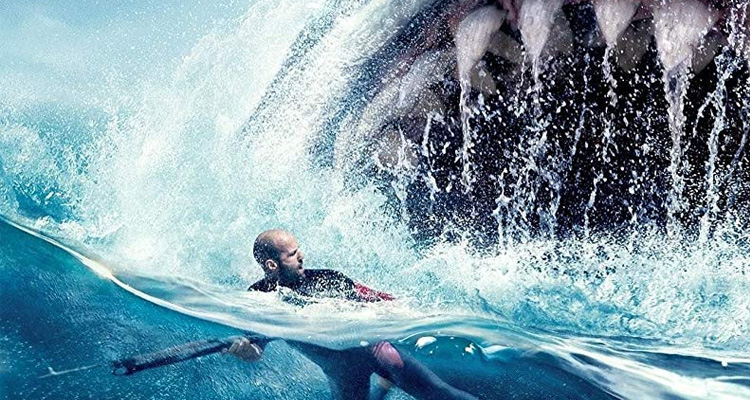 The Plot: A team of marine research scientists, led by Zhang (Winston Chau) and his daughter Suyin (Li Bingbing), are testing the world’s deepest ocean, the Mariana Trench. It appears that there’s a hidden world underneath the ocean floor. When a submersible is attacked and left powerless by a large predator, washed-up deep sea diving expert Jonas (Jason Statham) is reluctantly called in to save the crew. However, they have a much bigger problem on their hands. A giant prehistoric shark called the Megalodon or Meg for short is floating about and prised for attack. They’re gonna need a bigger boat…

The Verdict: Megashark vs The Stath. It’s a possible alternate title for The Meg, a silly slice of summer hokum that’s frankly lucky to get a cinema release. Isn’t there a home for these mediocre Hollywood films these days – i.e. going straight to Netflix? Or at the very least, a SyFy Channel special? This slightly odd Chinese-American co-production very much plays into those murky, waterlogged expectations. The essence of the wafer-thin plot is that of a giant 70-foot- plus shark terrorising a deep sea crew, followed by a further assault on a group of panicked bathers later on (how does a shark that big attack in shallow waters?).

It’s all very sub-Jaws. Or more accurately, it bears more than a passing resemblance to Jaws III. There’s a boo-hissable corporate villain in deep sea rig owner Morris (Rainn Wilson), more than one shark involved and a general air of overcooked laziness about the script, adapted from the novel by Steve Alten. There’s a distinct lack of tongue-in-cheek humour from director Jon Turtletaub, which would have gone some way to gaining audience credit. The film takes itself far too seriously – it’s a giant shark film after all, not a meditation on a broken man finding his way again. A cheesy romantic sub-plot, urged on by a cutesy kid, rounds off that lack of edginess.

Speaking of which, action hardman Statham brings one of his stoic reluctant hero types to the page here. Nothing too radical, but he stays anchored when the rest of the film is floundering about looking for a lifejacket. In other words, a fun idea looking for better execution. The action sequences lack bite, concealing the shark for nearly 50 minutes before finally giving us a good look. The shark is visually impressive, but Turtletaub signposts too many attacks in advance so that it all becomes wearingly predictable. He needed to have more fun with the idea, like Piranha 3DD or The Shallows. A family-friendly rating ensured that wasn’t going to happen, so it feels blunted. The Meg is daft summer fodder and a predictable time killer, but Jaws would eat it for breakfast.