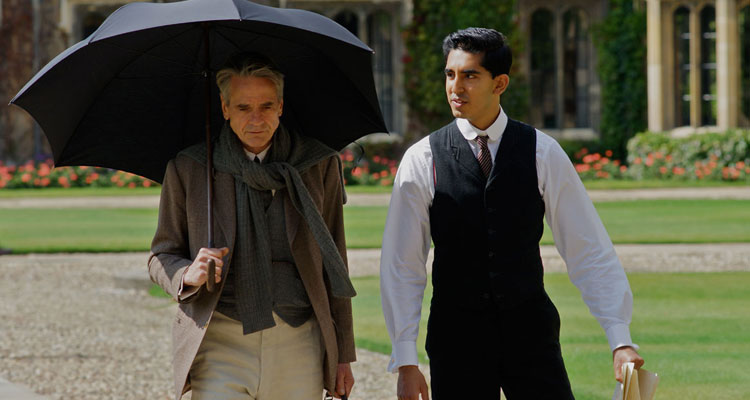 The Man Who Knew Infinity

THE MAN WHO KNEW INFINITY (UK/12A/108mins)
Directed by Matt Brown. Starring Jeremy Irons, Dev Patel, Toby Jones, Jeremy Northam, Stephen Fry.
THE PLOT: During World War I, Srinivasa Ramanujan (Dev Patel) travels from Madras in India to Trinity College Cambridge to publish a paper on his findings in mathematics, under the supervision of G.H. Hardy (Jeremy Irons). While there, Ramanujan soon realises that he is going to be put through his paces and made to prove his findings before anything is published. At the same time, Ramunujan deals with discrimination and racism, all while trying to keep his spirits and health up, and his relationship with his wife in India alive.
THE VERDICT: Based on a true story, ‘The Man Who Knew Infinity’ is a charming and touching film with strong performances at its heart, but is also a film that struggles with feeling disjointed and unfocused. Dev Patel carries the film as Ramanujan, and does well with making the character earnest and enthusiastic. It is with Patel that the story lives and dies, so his enthusiasm in the early part of the film makes us root for him, and when this enthusiasm is stripped away the audience begins to root for this underdog, who also happens to be a fish out of water. Jeremy Irons is strong as the unfriendly but caring G.H. Hardy, and it is mostly in the clash between Patel and Irons that the drama of the film is created. The rest of the cast features Toby Jones, Jeremy Northam, Stephen Fry and Devika Bhise.
Matt Brown’s screenplay, based on the biography of Srinivasa Ramanujan by Robert Kanigel, tries its best to marry the events of the world, the events of Trinity College Cambridge and the culture shock and borderline rejection that Ramanujan feels throughout the film, with varying degrees of success. The film is at its strongest in the conversations between Hardy and Ramanujan, but it is when the screenplay tries to bring in the concerns of Ramanujan’s family back in India, and show the passage of time that it begins to feel episodic and disjointed as it jumps through time seemingly at will. A stronger focus would have meant the film was either about the clash of cultures or the struggle of mathematics at the time, but as it stands, the screenplay tries to combine both and ends up with something that is not quite either.
As director, Matt Brown takes to his first project since ‘Ropewalk’ in 2000 with gusto, but amps up the emotional saccharine sweetness a little too high, meaning that the actual struggle that Ramanujan would have gone through is lost in a sweet fog. As well as this, the film is oddly paced, with the focus shifting from person to person and issue to issue so often that the core heart of the film gets overshadowed from time to time, and the audience forgets that this is a film that is, above all, about a man trying to make his voice heard.
In all, Jeremy Irons, Dev Patel and Toby Jones shine in ‘The Man Who Knew Infinity’, but this earnest and heart warming story becomes muddled with too many storylines, odd pacing and not enough focus on the mathematics. Never thought I would get to write that in a review… Or ever.
RATING: 3.5/5
Review by Brogen Hayes