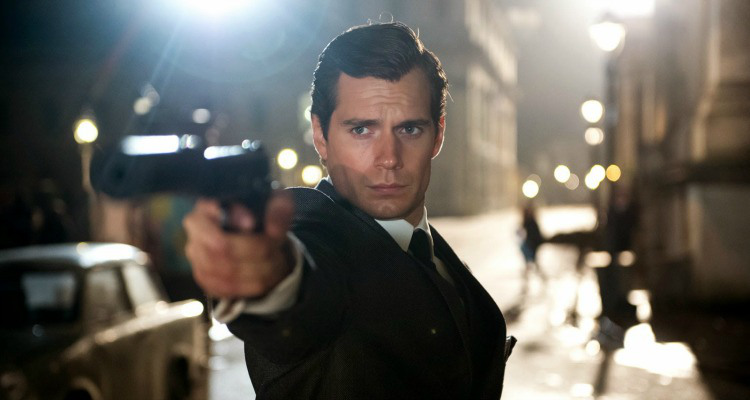 THE MAN FROM U.N.C.L.E (USA/12A/116mins)
Directed by Guy Ritchie. Starring Henry Cavill, Armie Hammer, Alicia Vikander, Hugh Grant, Jared Harris.
THE PLOT: In 1963, CIA agent Napoleon Solo (Henry Cavill) and KGB agent Illya Kuryakin (Armie Hammer) are forced to work together to take down a mysterious criminal organisation, with the help of Gaby (Alicia Vikander), a German mechanic whose rocket scientist father has gone missing.
THE VERDICT: The film version of THE MAN FROM U.N.C.L.E has been in the works for a long time, and arrives on cinema screens at a time when spy movies seem to be all the rage again. However, with ultra-contemporary films like MISSION: IMPOSSIBLE – ROGUE NATION, SPY, KINGSMAN: THE SECRET SERVICE and SPECTRE all released this year, it seems THE MAN FROM U.N.C.L.E suffers from not trying to be pastiche of the TV show it is based on, and being far too proud of itself.
There really is no denying that Henry Cavill is a ridiculously good looking actor, and he looks great in a tailored, James Bond-esque suit. Cavill makes Napoleon Solo rather cold, but a decent spy, who seems to be constantly tripped up by his hatred for his KGB colleague. We never truly get to know the character all that well, other than the fact that he is a bit of a womaniser, and what is revealed through exposition, which leaves the audience unengaged. The same goes for Armie Hammer as Illya Kuryakin who, other than having a strong sense of Russian pride and a love for his father’s watch, seems rather vanilla. Alicia Vikander fares slightly better as Gaby, but although she starts off as tough and capable, by the end of the film she is reduced to a damsel in distress. The rest of the cast includes Hugh Grant, Elizabeth Debicki and Jared Harris.
The story, written for the screen by Guy Ritchie and Lionel Wigram, covers the origins story for the TV show. Most of the film’s action and attempted humour comes from pitting Hammer and Cavill against one another in a Cold War pissing contest, and this soon grows tiresome. Although the film tries to be fresh and classic at the same time, there is very little to engage with, since the story is neither pastiche nor parody of the original TV show – despite what the trailer would have you believe – so it soon becomes style and sexist quips over substance. At least the love story that is shoehorned in is not a love triangle though.
As director, Guy Ritchie tries to strike a balance between the action and the rivalry between the two agents but, although some of the set pieces are engaging, the film’s tone is never quite right. As well as this, the pacing is messy which means that the film feels unnecessarily slow in places. Although the style and look of The Man From U.N.C.L.E feel accurate as a period piece, there is a feeling of smugness about the whole affair that sucks out any charm the film might have had to begin with. At least the villain is a woman though, eh!?
In all, THE MAN FROM U.N.C.L.E is an origins story we didn’t necessarily need. There are some entertaining moments throughout the film, but the characters are thinly drawn, the pacing messy and the whole thing feels far too pleased with itself to actually be much fun. It feels as though the film missed a chance at pastiche by playing it straight, and suffers because of this. Superman and The Lone Ranger may set out to save the world, but it doesn’t seem like they are going to save this franchise.
RATING: 3/5
Review by Brogen Hayes