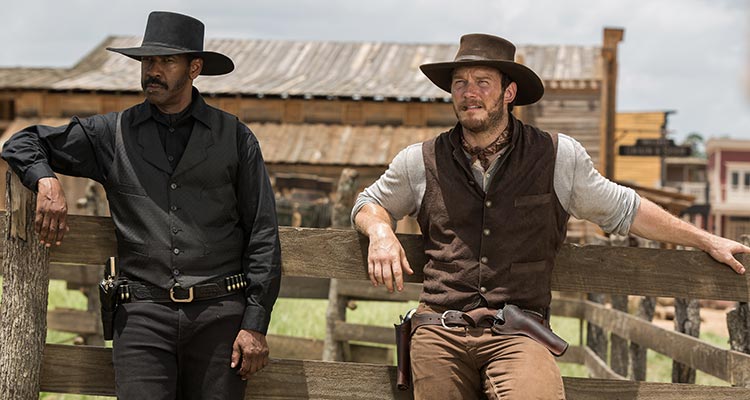 THE MAGNIFICENT SEVEN (USA/12A/132mins)
Directed by Antoine Fuqua. Starring Denzel Washington, Chris Pratt, Haley Bennett, Ethan Hawke, Vincent D’Onofrio
THE PLOT: In the old West, businessman and rogue Bartholomew Bogue (Peter Sarsgaard) has his eye on the small town of Rose Creek, which happens to be home to a literal gold mine. When Bogue kills several of the town’s men and gives everyone else three weeks to decide whether or not to sell to him, Emma Cullen (Haley Bennett) sets out to round up outlaws whose loyalty can be bought, in order to protect the town from Bogue and his men.
THE VERDICT: A remake of a remake of a remake, it seems like ‘The Magnificent Seven’ is another remake that is surplus to requirements – and in many ways it is – but there is enough in the film to keep audiences interested, even if this new version of the story of gunslingers fighting for the little guys is heavy on action and light on plot.
The seven are made up of Chris Pratt, Denzel Washington, Ethan Hawke, Vincent D’Onofrio, Byung-hun Lee, Manuel Garcia-Rulfo and Martin Sensmeier. Each of them do fine in their role, although they are never really given a chance to be anything other than superficial. It is obvious that the seven have fun with their roles though – especially Chris Pratt and Ethan Hawke – and their enthusiasm is infectious. The rest of the cast is made up of Haley Bennett, Matt Bomer and Peter Sarsgaard, whose villain is just the right amount of oily and sinister.
Richard Wenk and Nic Pizzolatto’s screenplay – adapted from ‘Seven Samurais’, not the 1960 film, for those curious – is fine, but the dialogue is nothing special and the story often runs a little thin. None of the characters are particularly well fleshed out, and we learn how the characters know one another but never truly discover their motivations in taking on a fight that isn’t theirs.
As director, Antoine Fuqua keeps the film moving at a steady pace for the first two acts, before the final set piece arrives and sucks any sense of urgency out of the film. The performances from the cast are fine, but most are one note and, as mentioned, the audience never really gets to know anything about this merry band of anti-heroes, leading to an emotional disconnect with the film. That said, ‘The Magnificent Seven’ is beautifully shot, and shows off Monument Valley – made famous by so many great Westerns – to great effect.
In all, ‘The Magnificent Seven’ is a remake we didn’t need, but there is fun to be had here. The cast do fine with the little they are given, and the film looks beautiful, it just needed stronger character development and some better pacing in the final act.
RATING: 3/5
Review by Brogen Hayes