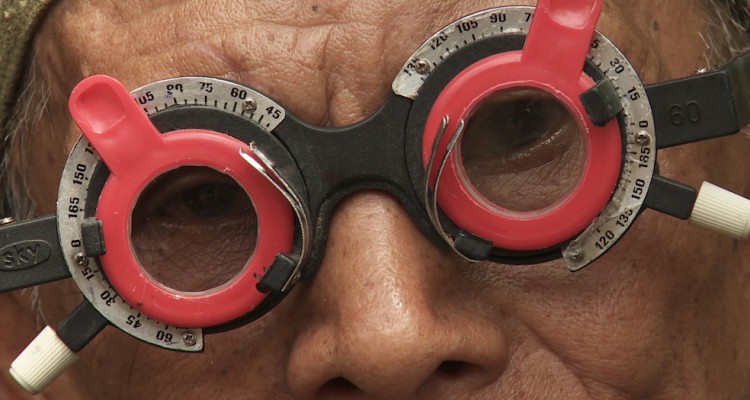 The Look of Silence

THE LOOK OF SILENCE (Denmark | Finland | Indonesia | Norway | UK/TBC/103mins)
Directed by Joshua Oppenheimer.
THE PLOT: Joshua Oppenheimer follows up his award winning film THE ACT OF KILLING with another uncomfortable look at Indonesia, post the genocide of 1965 which saw between 1 – 3 million people slaughtered for allegedly being communists. The Look of Silence follows an optometrist named Adi as he meets those responsible for the killings, during which his older brother died, and tries to ascertain the truth, while asking the men to accept responsibility for what they did.
THE VERDICT: In THE ACT OF KILLING, Oppenheimer confronted those responsible for the killings himself, asking them to tell him about the experiences and allowing the enormity and horror of their actions to dawn on them as the film was being made. This time, Oppenheimer accompanies Adi as he openly and fearlessly confronts the men responsible for his brother’s death.
Adi and Oppenhenimer are brave in their decision to approach an ongoing situation in such a manner, and the subjects of the documentary – the heads of the death squads and their families – are obviously uncomfortable about their actions. At first, they brag; cutting off a woman’s breast, taking a dismembered head into a café and drinking the blood of the slain so they did not go mad seem to be things that these men are proud of, but as Adi presses deeper, he is almost always shut down as it becomes clear that he is not making a film celebrating the murders, but questioning them. Oppenheimer allows the camera to linger on the faces of the killers, often pushing the boundary of comfort as they demand the camera be shut off.
As well as this, Oppenheimer studies Adi’s family; his brother was killed before Adi was born, but even now, almost 50 years after her son’s death, Adi’s mother still mourns his death. It is clear that the emotions of this woman – who muses that she must be about 100 years old – are incredibly close to the surface and, even as she states it is God’s place to punish the wicked, it is clear that the lack of closure, and the fact that her son’s killers roam free have not allowed her to grieve properly, and she is almost stuck in the past, at the moment of her son’s death.
Oppenheimer’s film blends the stories of the killers and the victims’ families together, but the message that comes from both sides is often the same; the past is past. This shows that Indonesia has never been given the chance to heal and, combined with interviews with the killers who brag about their gory work, it shows that the country has not yet accepted that the deaths of millions of people was not only unnecessary and unwarranted, but it has wounded the country in a way that it has not yet started to heal from.
In all, THE LOOK OF SILENCE is an intensely powerful but profoundly uncomfortable film to watch. Oppenheimer and Adi’s actions are brave and honest, and the film shines a light onto issues that have not yet been acknowledged, much less resolved.
RATING: 4/5
Review by Brogen Hayes