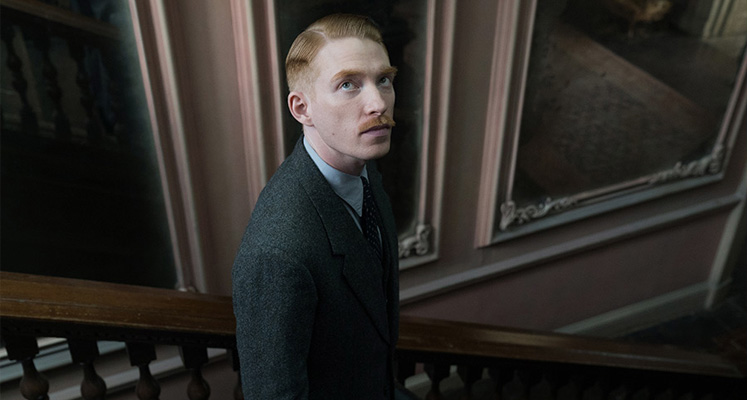 The Plot: Post-war England. Doctor Faraday (Domhnall Gleeson) is a respected country doctor. He’s called to Hundreds Hall, the residence of the Ayres family, to treat a child. There, he reconnects with Caroline (Ruth Wilson) who he has not seen in a long time. Faraday’s mother served as a maid in the house’s glory days and Faraday had some memories of the place. Now those days are long past as the mansion is a faded beauty, crumbling under the weight of neglect. There is an atmosphere of unease in the house, which icy matriarch Mrs Ayres (Charlotte Rampling) and her badly burnt former RAF son Roderick (Will Poulter) suspect has something to do with a buried family secret…

The Verdict: What a director does next after an Oscar-winning film will no doubt be scrutinised more than his previous films. Irish director Lenny Abrahamson follows up his heart-breaking and uplifting Room with another story of a troubled family trapped in its own micro-environment in The Little Stranger. It’s adapted by Lucinda Coxon from the novel by Sarah Waters and plays very much into Abrahamson’s style of coaxing concentrated performances from his actors and using subtle direction to guide them along. There’s a touch of Evelyn Waugh’s Brideshead Revisited in its depiction of an outsider discovering that a house can hold its own memories for generations, leaving traces long after its people have departed for the next world.

It’s the next world that The Little Stranger is partly interested in. Waters didn’t originally set out to write a ghost story – it just turned out that way. It wouldn’t be fair to call this a horror film, as it’s neither scary enough nor visceral enough to qualify. It’s more accurate to describe it as a slow-burn chamber piece with gothic overtones, a mystery that raises more questions than answers. With a nod to the book, Abrahamson is more intrigued by the prospect of raising those questions for the audience to discuss after the film. This is admirable on his part, but it’s also a little frustrating not to have a clearer answer. This is also hampered by an occasional stiffness in his direction, though that may be an intentional reference to the English stiff-upper-lip. When passion does break out between Faraday and Caroline, it’s awkward and spectacularly mis-judged by Faraday, as if he’s not really paying attention to what’s going on in this house.

However, Abrahamson doesn’t upset the delicate equilibrium of his film too much. After some wobbly moments, he quickly gets the film back on course to draw the audience deeper into its gothic mystery. Roderick becomes a Frankenstein-like creature in one scene, as Faraday jolts electricity into his damaged leg. The air of unease in the house spreads as it starts claiming lives and Faraday discovers his own strange connection / obsession to this house. Gleeson and Wilson do solid work here, keeping their buttoned-up characters relatable even when this world is different from our own. The house becomes a character in its own right, an environment that is not evil but not good either. More like a house with mixed memories that linger.

The Little Stranger doesn’t hold any easy answers, but it’s intriguing enough to warrant a recommendation due to its performances, darkly sombre atmosphere and controlled direction from one of Ireland’s best contemporary directors.