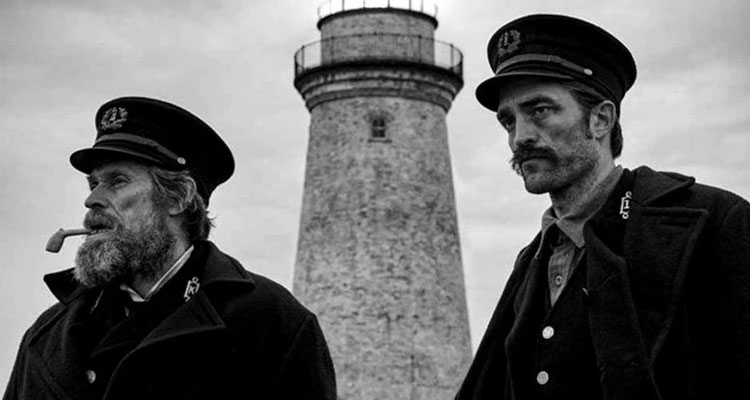 The Plot: New England, the 1890s. Crusty old seadog Thomas (Willem Dafoe) arrives on his lighthouse station with new recruit and former timberman Ephraim (Robert Pattinson) for a four-week stint watching the waters and keeping the light going for ships passing in the night. The superstitious Thomas believes there is enchantment in the light and warns Ephraim to keep away from the light. Instead, he gives Ephraim menial jobs to do around the island. As a vicious storm hits and cuts them off from the land, their emotions rise in turn with the stormy waters around them. When they’re not having a big knees-up at dinner, they’re at each other’s throats as they begin to question their own sanity…

The Verdict: In 2015, New Hampshire-born director Robert Eggers made a startling debut with The Witch. A strongly atmospheric mood piece, it had a sickening and impending sense of doom, all soaked in accurate period detail and a careful use of the authentic language of the pre-Salem witch trials era. Naturally, it was a hugely divisive film and didn’t fit neatly into a horror-shaped coffin. Like Donnie Darko director Richard Kelly (what’s he up to these days?), Eggers is not interested in making films that are easily categorised. His films are singular and distinctive cinematic experiences, influenced by the work of Stanley Kubrick, David Lynch and more. His second film The Lighthouse comfortably overcomes that difficult second album syndrome to once again challenge audiences to strap themselves in and go along for one wild ride.

Eggers script, co-written with his brother Max, is loosely inspired by a real-life incident involving two stranded Welsh lighthouse keepers in 1801, as well as the work of Edgar Allen Poe and even one H.P. Lovecraft. By his own admission, Eggers says it’s a thinly-plotted story. Two characters losing their minds on an island while having to deal with the stormy elements, superstitions, cheeky seagulls, nightmare-tinged visions of a mermaid, occasional flatulence that rivals Blazing Saddles and most importantly – dealing with each other. While not a lot actually happens over the course of the film, Eggers fills the running time with enough intriguing and occasionally laugh-out-loud scenes to keep the story well afloat. There’s an air of absurdity about the film, but done in a way that doesn’t draw too much attention to itself. It’s a more subtle, carefully-calibrated story than that.

The script can only do so much though. Eggers relies heavily on his actors to make his two lighthouse keepers jump off the page and onto the screen in vivid colours, even when the film is a distinctly black-and-white affair. Shooting in the boxy Academy Ratio only adds to the claustrophobia surrounding the characters, allowing Dafoe and Pattinson to bounce off each other while the sparks fly. Speaking in carefully cadenced language that is as salty as the sea around them, the actors have a whale of a time roaring, shouting, bonding and then breaking as the cracks begin to show in their testy characters. It’s both a challenge and a joy to keep up with them, while also soaking in the oppressive atmosphere that Eggers conjures up via the production design and ominous score. It’s a film that not only looks the part but is able to perform spectacularly too in other departments.

While it won’t be for everyone, The Lighthouse shines brightly and proves that The Witch was no fluke. Eggers has a consistent directorial style all of his own. This powers his films into the realm of pure cinema and a surprisingly engaging one at that, given the heady subject matter. Drop your anchor and soak in the briny depths of this singular and impressively-mounted film.