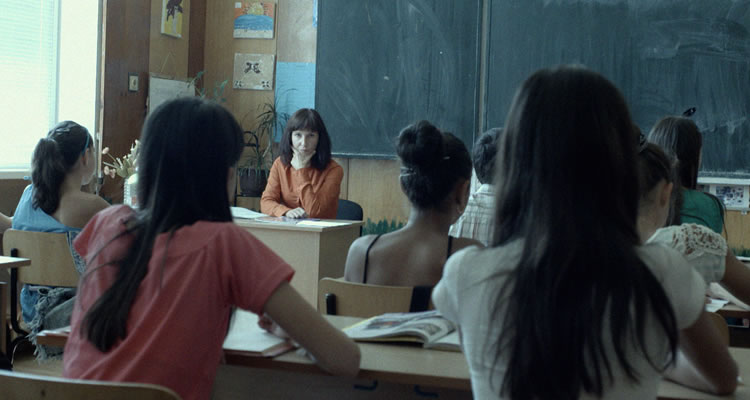 THE LESSON (Bulgaria|Greece/12A/111mins)
Directed by Kristina Grozeva & Petar Valchanov. Starring Margita Gosheva, Ivan Barnev, Ivan Savov, Stefan Denolyubov, Ivanka Bratoeva
THE PLOT: When her wallet is stolen by one of her students, schoolteacher Nade (Margita Gosheva), is determined to find out who is responsible. Not exactly flush with cash, Nade and her family’s woes deepen when they are told their home will be repossessed. Rather than lash out at the husband who spent the mortgage payments on car parts, Nade sets out to solve both of her problems, but soon finds the method she uses to be increasingly complicated and difficult.
THE VERDICT: ‘The Lesson’ feels a little like last year’s ‘Two Days One Night’, with Nade finding herself increasingly alone as she journeys through her small Bulgarian town to try and find a way to save the family home. Like Marion Cotillard in the Dardenne Brothers’ film, Margita Gosheva carries the film with confidence and grace, allowing the additional, almost petty strains that pile upon her to fray away the edges of her calm. The rest of the cast, Ivan Barnev, Ivan Savov, Stefan Denolyubov and Ivanka Bratoeva do well in backing Gosheva up, but it is she who is the heart and soul of the film.
Kristina Grozeva and Petar Valchanov’s screenplay feels relatable to so many, with homes being lost around the world, and the simplicity of how everything spirals out of control has the audience rooting for this mild mannered woman who wants nothing more than to live her life the way she has been.
As directors, Grozeva and Valchanov build the tension of ‘The Lesson’ throughout the film so skilfully, that when Nade finally reaches her limit, the tension on screen and in the cinema is palpable. There could be a morality tale at the heart of the film, but this is not what The lesson has set out to do; instead, this is the story of a woman remaining graceful under extraordinary odds. Although the audience may not always agree with her decisions, ‘The Lesson’ is so carefully constructed that we do always understand why Nade makes the decisions she does, and we are always on her side.
In all, ‘The Lesson’ is a film about tenacity, pride and desperation. Margita Gosheva is solid, emotional and powerful in the leading role, and the film is so cleverly constructed as to pull the audience in from the opening moments. There are times where we wonder just how much one woman can take, but the resolution of the film is uplifting and satisfying.
RATING: 4/5
Review by Brogen Hayes