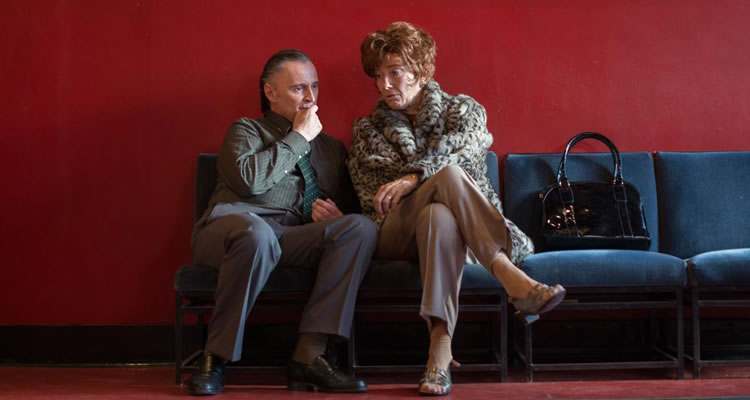 The legend of Barney Thomson

THE LEGEND OF BARNEY THOMSON (Canada | UK/15A/96mins)
Directed by Robert Carlyle. Starring Robert Carlyle, Emma Thompson, Ray Winstone, Tom Courtenay, Ashley Jensen.
THE PLOT: Barney Thomson (Robert Carlyle) is a Glaswegian barber who wishes he had made more from his life. Prone to outbursts of anger, he is finally fired but as he begs for his job back, he accidentally kills his boss and, with a serial killer on the loose, decides to get rid of the body and hope for the best. Of course, nothing ever seems to go Barney’s way, and a series of unfortunate events later, he finds himself a reluctant and pursued serial killer.
THE VERDICT: Although Robert Carlyle seems to be having a great time on TV at the moment, with recent roles in ONCE UPON A TIME and SGU STARGATE UNIVERSE, it seems like a long time since we have seen him on our cinema screens. This week, all of that changes with Carlyle not only playing the lead role in THE LEGEND OF BARNEY THOMSON, but also taking over behind the camera, with his directorial debut.
Carlyle plays Thomson as a man who seems bewildered at how he has meandered through his life, and wishes for more. Swinging between anger and bewilderment, Carlyle makes the character warm and unfortunate enough for the audience to root for him. The real star of the show here, however, is Emma Thompson as Barney’s overbearing and ultimately cruel mother Cemolina. Thompson is hilarious and vitriolic as Cemolina, and it is she that shines through every scene that she is in. Ray Winstone sticks with type and plays angry and disappointed police officer Holdall, Ashley Jensen steps away from the nice woman roles she is known for and curses up a blue streak as Detective Inspector June Robertson, and Tom Courtenay turns up as Chief Superintendent McManaman.
The story, written for the screen by Richard Cowan and Colin McLaren, is a dark, violent and profane look at a disappointing life that suddenly becomes extraordinary… For all the wrong reasons. The dialogue is not only filled with some incredibly inventive insults – ‘You look like a haunted tree’ being a standout – but it is twisted and twisting enough to keep the audience engaged for the most part. Towards the end, audience sympathy for Thomson does begin to wane a little, but the final resolution is not only deliciously dark, but wonderfully funny.
As director, Robert Carlyle captures the dark side of Glasgow, the rapid fire insults and wit of its inhabitants and the balance between dark bloody violence and twisted humour. The characters are rounded out enough for the audience to engage with them, and he has directed a standout performance from Emma Thompson. The pacing of the film, however, is a little sloppy. The film runs out of steam in its final act and, at times, feels way longer than its 96 minute running time. The film is beautifully and carefully shot, however, with even the grimiest of locations looking stylish and oddly beautiful.
In all, THE LEGEND OF BARNEY THOMSON is a stylish and clever directorial debut from Robert Carlyle. The careful balance between gore and laughs is struck, for the most part, and although the novelty and shine wear off the film in the final act, there is enough here to keep the audience engaged and rooting for the anti-hero. Carlyle carries the film ably as the title character, and Emma Thompson is perhaps the best – and most vulgar – she has ever been. With THE LEGEND OF BARNEY THOMSON, Carlyle proves that while he still has some lessons to learn, he is a director to watch out for.
RATING: 3.5/5
Review by Brogen Hayes