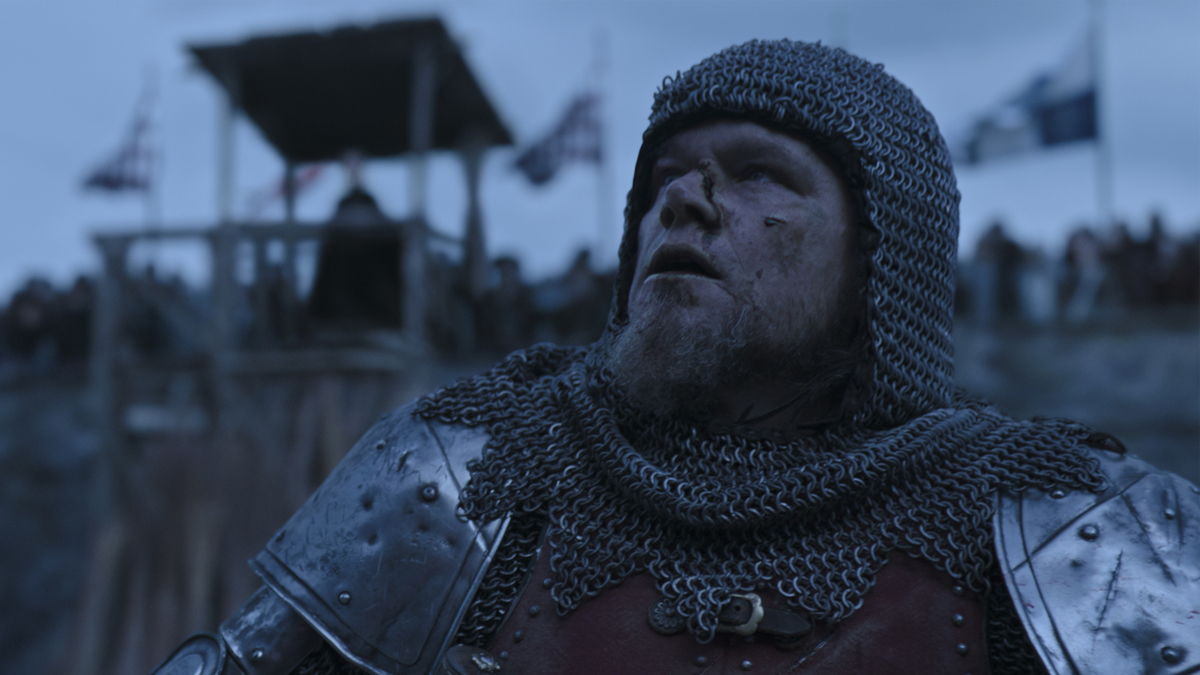 THE LAST DUEL cast talk about filming in Ireland

‘The Last Duel’ made headlines last year when star Matt Damon was forced to stay in Dalkey, when lockdown was put in place, while he was shooting on location in Ireland. Based on actual events, the film looks at France’s last sanctioned duel between Jean de Carrouges & Jacques Le Gris, two friends turned bitter rivals. We were lucky enough to attend a press conference for the film and ask questions to the films cast Jodie Comer, Ben Affleck, Matt Damon & Nicole Holofcener.

What was it like filming in Ireland?
Ben Affleck: I love it. It was wonderful, the beautiful people are lovely, and it was mitigated only by the fact that it was during the pandemic, and so we got to shoot, and then you immediately had to be wrapped in your sarcophagus and separated. Ireland is a magical, lovely place, and like many people from Boston, I grew up hearing that I was Irish. It’s an incredible place, and the crew was extraordinary.

Matt, did you enjoy living here?
Matt Damon: We had the best time. Our movie shut down because of COVID the day we got to Ireland, and we had the choice to go come home to America or stay. We’d never spent any real time there, and so we took a family vote, and we decided to stay, and it was amazing. All these guys [Ben, Jodie etc.] had rented these beautiful houses for three months that they abandoned because they all went back to their homes, so we took them all over. We turned one into a school for our kids; it was great. We were free rolling in a beautiful town in Ireland for three months, and the community there absorbed us in a really beautiful way.

MP: What was it like working with Ridley Scott?
Jodie Comer: I read the script, and I was so fascinated by the structure of it and this idea of there being three perspectives but, ultimately, only one truth. I remember I met Matt early on, and he said that Ridley works at a pace that he has four or five cameras rolling: it’s fast. I’ve never worked like this before, and it was just really fascinating to see how he makes his decisions, his attention to detail, whether it be through the characters in the story or the locations and the set design, he doesn’t miss a trick. The film has a lot of heart, but it’s also a spectacle, and it has the fighting and the duels.

How did you know he was the right director for the movie?
Matt Damon: The moment I saw the cover of the book of The Last Duel, I just knew. Ridley’s first movie was The Dualists. We did The Martian together six or seven years ago, and I just had the best time working with him partly because of what Jodie said about the four cameras. He has so much momentum, and you can feel the energy. You can have your agent negotiate for a trailer, but you’re never going to go there except to change your clothes in the morning; you ain’t going back. It’s really exciting, and I just love that. I gave him the book, and he said right away he would read it and then he wanted to do it. We were looking for a writer, and I was having dinner with Ben and told him the idea, and he said, why don’t we write it? It happened really quickly, we started writing, and Ridley had another movie, but he decided he wanted to do this instead, and then we begged Nicole to join, and she did. Ridley was the perfect guy to do it; he has this scale that he does everything, and he got that this was delicate with the three different perspectives because we were really playing three different versions of these characters.

On the different versions, how did you find working in that way, particularly in a pivotal kiss scene?
Jodie Comer: I think the beautiful thing about the script was, it was all there on the page. The intentions were very clear as to what was needed in each perspective, and what was sometimes jarring was that we shot each version simultaneously, so we literally jumped from one to the next. I’ve always wanted to make sure that we got Marguerite. I felt very loyal to her and really wanted to make sure that we got that in the bag, and then I felt like I could play around with the other versions. I was afforded a lot of freedom in what I wanted to explore. We played around with the subtlety and how far we wanted to push it, and we got a little bit delirious when we were doing the kiss, and we all got really bad, bad giggles, which wasn’t ideal. It was great to see the final film then and see how all those moments play out. It’s so important that when you’re in each perspective, you’re really invested in what that character is telling you.

Matt Damon: Jody is very humble because she helped with the writing. After work, we had sessions where we would have dinner, and we would sit and go through the script with Jodie. When you have a great actor, they’ll say this moment doesn’t feel right; I don’t feel like I’d say that. As a writer, if you have a great actor, you really want to listen to them because they’re going to steer you towards where a scene needs to be, so she was really helpful in the writing process.

Matt and Ben, it has been a long time since you have written together. Why now and why this story?
Matt Damon: We were afraid of writing because we were so inefficient. It was so time-consuming the first time we did it because we didn’t know what we were doing, and it took us literally years. We wrote 1000s and 1000s of pages that we basically scrunched into a 130 Page screenplay, but I think by doing movies for 25 years by osmosis, we figured out structure, so this time it turned out to be a really efficient process. Bringing an incredible writer like Nicole to come help us was also a really good idea that definitely streamlined the process.

Nicole, Ben and Matt have been friends and collaborators for years. What was it like to become part of that unit?

Nicole Holofcener: Matt and Ben had decided to write it in a three-part point of view. They asked me to write the last part, and I was thrilled. I was flattered and thrilled and wasn’t sure I could do it, but I did it. I would send pages to them, and we’d sit down together and work, and we’d work on each other’s scenes. I wrote the third act, but they also had a hand in it because it had to be a part of the whole movie. When smart writers have ideas, one should take them. Between Ben, Matt, and the actors, it was really collaborative.

Matt Damon:  Ben and I were adopting a book; Nicole was really writing an original screenplay because the men of the time took very fastidious notes about what they were all up to, but they didn’t record what the women were doing. Nicole really had to create Jodie’s character’s world.

As writers, were you concerned about the three-part style and how the actors would have to change their performance to suit each chapter?

Ben Affleck: Jodie is so smart and brave and complicated. I’m not sure every actor would have been willing to play another character’s point of view of themselves, rather than their sense of their true self. She does that so perfectly so that it’s seamless; you don’t get a sense that it’s an exaggerated version of a person; it feels like versions of women we’ve seen in movies before. We wanted to exploit the fact that, historically, people are largely accustomed to women being secondary and tertiary characters so they wouldn’t seem out of the ordinary. She was willing to play that, and that makes her chapter so much more powerful and elegant to see the difference between a two-dimensional person and a fully realized person.

Even though the film is set in the 1300s, it translates into contemporary issues. Do you think it’s more important than ever that we see films like this from a female perspective?

Jodie Comer: The sad part about this story is that you could say for any part of history that’s gone by that this story is relevant. They’re extremely delicate subjects, and they need to be handled with sensitivity. I know for me, and all of us, especially in regard to the rape scenes that they couldn’t be gratuitous, they had to be moving the story forward, that was always at the front of everybody’s minds because you know that there are going to be many people who watch this film and sadly relate to it. That can be difficult to execute, and it can be difficult to watch, but I believe we shouldn’t shy away from it for that reason, as long as it’s handled with care.

How did you decide on the accent you use in the film? It is quite unlike the accents we have come to associate with historical films.

Ben Affleck: The interesting thing about it was trying to create a balance. First of all, the French would be unrecognizable to contemporary French speakers. The English at that time sounded like Chaucer. We worked with a dialect coach to find a way of speaking that didn’t sound contemporary or specific to another part of the world contemporarily. Sometimes in a period movie, they are all British.

Matt Damon: We couldn’t sound British because we’re playing French people in the middle of a hundred-year war with the British. The dialect coach built a way of speaking that didn’t sound modern; we wanted it to sound otherly.

Without spoiling the outcome, can you tell us about the duel?

Matt Damon: It was fully recorded at the time; it was a very famous thing, but it was decidedly uncinematic because these guys basically looked like giant tin cans. The only visible thing was their eyes through tiny eye slits. Ridley kept the bones of the duel as it did happen. Our stunt coordinator invented this beautiful choreography with Ridley, and they figured out how to shoot it. That’s the great thing about collaborating with great people. They kept the spirit of the duel, and it’s beautiful.”.

THE LAST DUEL is at Irish cinemas from Oct 15th