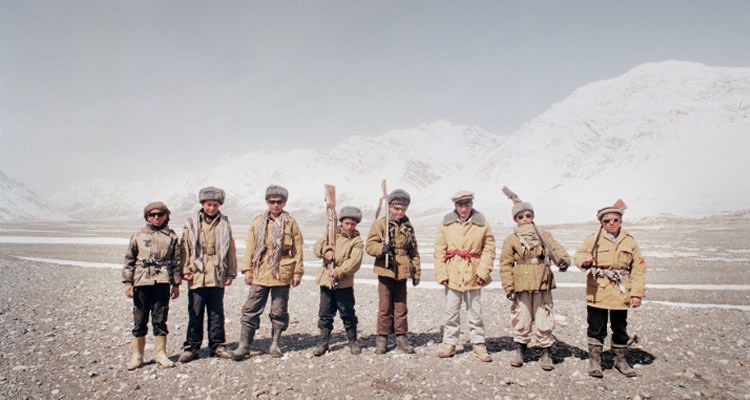 The Land of the Enlightened

THE LAND OF THE ENLIGHTENED (Belgium | Ireland | Netherlands | Germany | Afghanistan/15A/87mins)
Directed by Pieter-Jan De Pue. Starring Gholam Nasir, Khyrgyz Baj, Noor, Zulfu, Koko Ewas
THE PLOT: Child soldiers in Afghanistan patrol the deserts of the country, acting as bandits, while dreaming of the day that US troops finally pull out of their land.
THE VERDICT: ‘The Land of the Enlightened’ is a strange film to say the least. Documentary and fiction blend together to try and tell a story, but this ends up being spotty and confusing to the audience. As well as this, jumping between the kids and the US troops adds nothing to the story. Voice over tells the audience that Afghanistan is – according the myth and legend – God’s Garden that he gifted to the Afghan people, but they treat it as anything but. Drugs and ammunition flow freely here, as the children barter for everything they want in life, and run free and as wild, like a modern day version of Lord of the Flies.
There is a story to be told at the heart of ‘The Land of the Enlightened’, but the really interesting tale is that of the gang of child bandits. We never learn who they are, how they ended up in this situation or where their parents or guardians are, so it is hard to root for these drug running, violent kids. The plot is a mess, jumping from US troops shooting seemingly at nothing, to voiceover about Afghan myth, to these kids killing livestock and squabbling over the cooked animal’s brains.
In all, there is nothing really to learn from ‘The Land of the Enlightened’. There are times when a story could take place, and people about whom the audience is curious, but director Pieter-Jan De Pue never expands these, and seems to be happy enough just watching people drift around the Afghan wastelands, and squabble over a land where everyone is simply trying to survive. This ‘Lord of the Flies’-esque film simply does not answer the questions that it poses, and feels drifting and without a purpose.
RATING: 1/5
Review by Brogen Hayes

Review by Brogen Hayes
1
drifting and without purpose