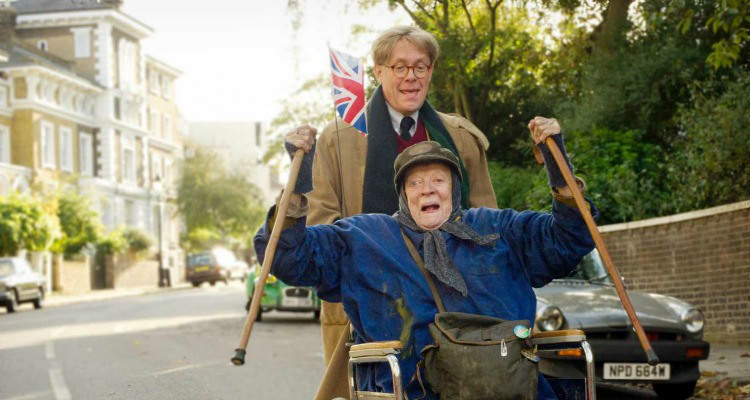 The Lady in the Van

THE LADY IN THE VAN (UK/12A/104mins)
Directed by Nicholas Hytner. Starring Alex Jennings, Maggie Smith, Frances De La Tour, Dominic Cooper, Samuel Anderson, Russell Tovey, Roger Allam, James Corden
THE PLOT: Based on a real relationship that writer Alan Bennett had, Maggie Smith plays Miss Mary Shepherd, a house-less woman who lives in her van, which Alan Bennett allows her to park in his driveway, where she stayed for 15 years. Although Miss Shepherd seems to be cantankerous and ungrateful, it soon becomes clear that she has led a tragic and colourful life.
THE VERDICT: ‘The Lady in the Van’ is based on Alan Bennett’s 1999 stage play of the same name, which in turn is based on a real relationship the playwright had with a woman on the fringes of society. Maggie Smith is the star of the show here, as the abrasive and obsessively private Miss Shepherd. Smith carefully treads the line between tragedy and comedy, and breathes life into the character, while also making sure that audience sympathy lies with this difficult local character.
Alex Jennings takes on the role of Alan Bennett, making the man timid and gently spoken but – in a little twist of the narrative – someone who talks to, berates and argues with himself as though there is another version of himself in the room. The rest of the cast includes Frances De La Tour, Dominic Cooper, Samuel Anderson, Russell Tovey, Roger Allam and James Corden. Most of them do not have a whole lot to do, since this really is the story of Bennett and his unlikely neighbour.
The story, written for the screen by Alan Bennett, claims to be mostly true, and perhaps it is this need to stick to events as they happened that gives the film a slightly underwhelming feeling. There are hints of car crashes, bribery and rumours surrounding Miss Shepherd, but the film focuses on the day to day, and the biggest trouble seems to be Miss Shepherd using Bennett’s bathroom. As well as this, the film desperately tries to draw parallels between Bennett’s mother and his unwanted neighbour, but this feels clumsy for the most part, as do some of the conversations between Bennett’s writer self and life self. Oh, and the less said about the ending the better.
Director Nicholas Hytner seems to have had fun with Smith and Jennings, and since much of the film focuses on conversations between the two, these are a joy to watch. The film that surrounds them is less successful however, with subplots appearing and disappearing, and the passage of time being shown in no real manner, other than in the peeling of the paint on Miss Shepherd’s van.
In all, the success of ‘The Lady in the Van’ is completely down to Maggie Smith and her on screen relationship with Alex Jennings. The film tries hard to create mystery and intrigue around Miss Shepard’s past and fails, for the most part, but the film is still sweet for the most part, it just doesn’t look deep enough beneath the comedy of a prickly woman to find the true tragedy underneath.
RATING: 3/5
Review by Brogen Hayes