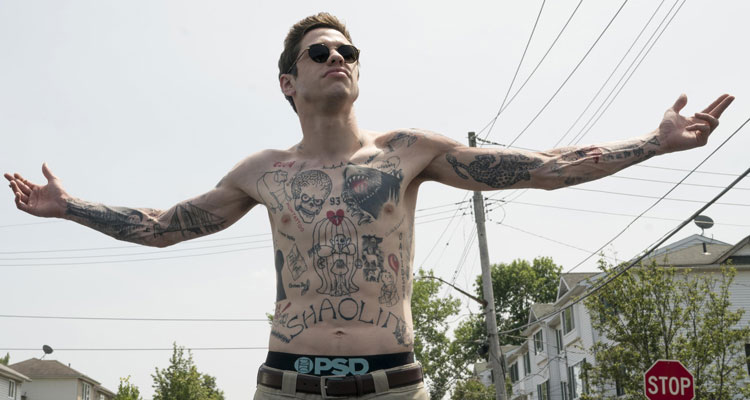 The King Of Staten Island

In short: Long live the king!

The Plot: 24-year-old Scott (Pete Davidson) never really learned how to grow up and be a man. Having lost his fireman father on the job at the age of 7, he lacks a fatherly guiding influence who can get him out of his rut. He’s in arrested development, a stunted manchild who thinks that life amounts to hanging out with his buddies in the basement, hooking up with gal pal Kelsey (Bel Powley) and dreaming of opening a ‘tattoo restaurant’. His exasperated mother Margie (Marisa Tomei) tolerates his meandering existence. With the departure of his far-more-mature sister Claire (Maude Apatow) for college, things are going to change. Margie starts dating again and of all people it’s another fireman – Ray (Bill Burr). Frustrated and not particularly liking Ray, Scott must finally grow up and become a man…

The Verdict: Remember this name: Pete Davidson. He may not be well-known on this side of the pond, but he’s already made something of an impression on Saturday Night Live. Enough of an impression for that chronicler of bittersweet American life stories, Judd Apatow, to create a star vehicle for the comedian / actor with his latest film The King Of Staten Island. After seeing the tasty fruit of their labours, you’ll be nodding readily in agreement that Apatow’s faith in his lead actor has been repaid in spades. This guy is going places and it shows. Himself a Staten Islander, he’s a triple threat. Davidson not only stars and co-writes but he also executive produces this semi-fictionalised account of his life experiences. Having lost his fireman father on the 9/11 terrorist attacks, Davidson has fashioned an amiable story about a young man trying to find a way forward in life, with Apatow and Dave Sirus fleshing out the script to give it more of a fully-formed character arc.

It may follow familiar themes that Apatow has covered before – familial conflict, sturdy blue collar work, a firm sense of community, aging, the ups-and-downs of imperfect relationships – but there’s something refreshingly upfront about the richly-layered script for The King Of Staten Island. Scott is something of a slacker who frequently has a habit of saying the wrong thing or being an embarrassment to his family. He’s the grown-up kid who still lives with his adoring mom and can’t accept that she has a right to move on with her life while he stays in comfortable stasis. This is brought into sharper focus when the character of Ray is introduced. It’s hate at first sight, exploding into a cold war between Scott and Ray. There’s an admirable attention to detail in the character building here, with Apatow bringing out deep character flaws and unruly behaviour that have the potential to tip the character (and character) of Scott away from audience empathy. Apatow is a keen observer of keeping his actors focused and on point though.

With his bug eyes and amiably goofy expression, Davidson gives a wholly convincing performance that balances out the comedic and dramatic aspects of Scott’s journey to becoming a man worthy of his father. There are plenty of laugh-out loud moments here, which Davidson mines for screen impact. An encounter with a tattooist quickly escalates as Scott puts his foot further into an almighty mess. Surprisingly, the beating heart of the film is not Scott’s relationship with Margie but with Ray. There’s a lovely thawing out of the cold war as they find that they have more in common than they think. The excellent Bill Burr bounces off Davidson’s youthful energy. For a manchild story like this to work convincingly, the dramatic beats have to work too. The character arc was clearly finessed in the script so that it comes across as natural and unforced by the time the credits roll.

As is often the case with Apatow, his films are half an hour longer than they need to be. Some judicious pruning in the edit suite wouldn’t have gone amiss here. However, when well-written characters like this are so much fun to hang around, it’s a minor fault that doesn’t upset the delicate balance of character, environment and room for change. Davidson has certainly earned his crown as The King Of Staten Island with this bittersweet and distinctive slice of contemporary New York life. Long live the king!
Rating: 4 / 5

‘The King Of Staten Island’ is available to stream on demand from June 12th.