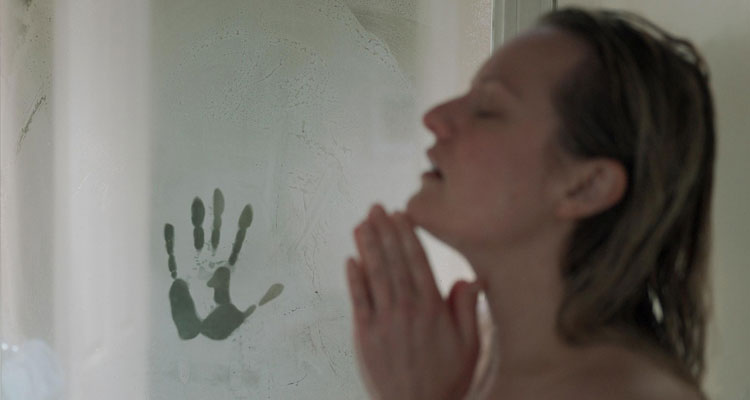 The Plot: Cecilia (Elisabeth Moss) is a woman living on the edge. She’s in an abusive and controlling relationship with her husband Adrian (Oliver Jackson-Cohen). She’s had enough and flees late one night. Shortly after, he apparently commits suicide and leaves a fortune behind. However, Cecilia knows Adrian and his mind games too well. He re-appears or rather doesn’t, as she believes she is being stalked by him in invisible form. How can she fight an enemy she can’t see… and how can she convince others of her sanity?

The Verdict: Good things can come from bad things. Universal’s shared cinematic world Dark Universe was launched in 2017 with much fanfare and a glitzy star-laden photo op that promised much… but delivered little. The Tom Cruise-starring The Mummy turned out to be something of a damp squib. The Invisible Man was on that slate and looked like it would slide off it soon enough. However, it bounced back due to the combined efforts of ace genre producer Jason Blum and the creative talents of writer/director Leigh Whannell, fresh from the success of his deliriously inventive cult hit Upgrade. Disconnecting it from Dark Universe and allowing it to be its own thing was a smart move, but even smarter was the decision to bring the story into the 21st Century.

H.G. Wells’ 1897 story has been adapted before, most notably the vintage Claude Rains version from 1933 – made during the landmark era of Universal Horror. The solution that Whannell has found is to re-version the story for the #MeToo generation. That is, to change the perspective from a mad scientist on the prowl to a strong-willed woman fighting back against a toxic relationship with her husband who has developed the technology to become invisible. Released just days after a landmark verdict against Harvey Weinstein found him guilty of sexual misconduct and behind bars, this new version couldn’t be more timely. It’s a thinking woman’s horror film, playing into genre expectations of the woman-in-peril against a stronger male aggressor… but then flips it to become deeper and more psychological. Is the new perspective convincing enough to work though?

The answer is a resounding yes. Whannell’s script is careful enough to keep the audience on Cecilia’s side, even when other characters (her doubting sister, Adrian’s lawyer brother) begin to question her sanity and curious behaviour. Cecilia is a fully three-dimensional character who leaps off the page, aided in no small part by Moss’ tremendous physical performance. She’s thrown about and stalked by an unseen force and gives her character some real gusto – and guts. There’s no questioning Cecilia’s opinions early on – she’s clued in fairly quickly. This is no supernatural occurrence. Adrian is trying to control her from beyond an apparent grave. That would be sufficient to power a standard horror alone, but Whannell is as interested in the psychological aspects of the story as much as the technological aspects.

There’s a fascinating power play and dynamic between Cecilia and Adrian, as she slowly but surely turns from victim to survivor to avenger. His invisible presence is felt throughout the film, keeping the audience on the edge of their seats. Whannell knows how to work the emotions of his audience – there were audible gasps during several scenes at this reviewer’s screening. It’s a tightly-wound film with minimal humour, instead creating an atmosphere of almost constant tension and dread. Whannell manages to maintain that tautness for 2 hours without slipping up – his confidence in the script and Moss’ dedication to the role pays off handsomely. If you’re going to reboot an age-old story for a modern audience, then this is an object lesson in how to do it properly. The Invisible Man is visibly thrilling. Hold on to your popcorn.